This coming Tuesday, the college football world will be witness to the first ever staging of the NOVA Home Loans Arizona Bowl. This game features two Mountain West conference teams in the Nevada Wolf Pack and the Colorado State Rams. Nevada is on a two-game skid but remains a dangerous opponent for the streaking Wolf Pack team that aims to close out its 2015 campaign with five straight wins and a bowl title.

For more 2015 bowl game previews, you can check out our breakdown of the Marmot Boca Raton Bowl, featuring Toledo and Temple.

[sc:NCAA240banner ]They lost to teams like UNLV and Wyoming, but somehow the Wolf Pack are going bowling. That’s of course thanks to a 6-6 overall record and a 37-34 overtime win over San Jose State on November 14 that made Nevada bowl eligible.

While the Wolf Pack’s overall season record isn’t impressive by any stretch, they nonetheless have a chance to erase the memory of a bitter 16-3 loss to Louisiana-Lafayette in last year’s R+L Carriers New Orleans Bowl. Based on their recent wins this season, it’s important for Nevada to establish its ground game early against Colorado State. The Wolf Pack are 6-0 this year when they rush for at least 230 yards, a record that is the complete opposite of their 0-6 slate when they failed to do so.

Considering that Colorado State has allowed at least 230 yards on the ground in five of its last nine games, Wolf Pack running backs James Butler and Don Jackson must be itching to get their hands on the pigskin. Butler tops the team with 1,156 rushing yards and eight touchdowns, while Jackson is right behind him with 1,025 yards and eight rushing scores as well.

Butler had at least 119 rushing yards in four straight games before being bottled by San Diego State in a 31-14 loss on November 28, when he was held to only 20 yards on eight carries. 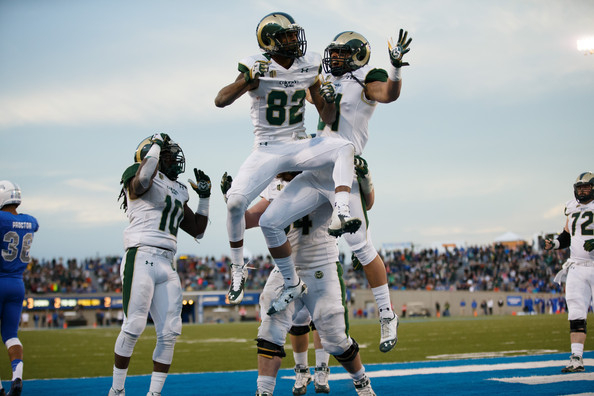 Jim McElwain packed his bags for Florida, but Mike Bobo appears to be a fitting successor, as he’s done a good job of keeping the Rams bowl relevant. And now that the Rams are going bowling, Bobo gets a golden chance to add more to his great year that has already seen him become the first Rams head coach to reach seven wins in his first year.

Colorado State’s rough start to the season in no way pointed to an appearance in a bowl game. But after going 2-4 in the first six games, the Rams managed to win five of the next six assignments—including four in a row to close out the season. The Rams did it mostly with an offense that’s fourth in the conference in scoring with 30.2 points per game.

That offense is in for a tough test against Nevada’s stop unit, but the Rams should be able to move the chains by utilizing their diverse set of weapons—none more dangerous than wide receiver Rashard Higgins, who’ll definitely give Nevada’s secondary fits. Higgins finished second in the MWC in receiving yards (933) and tied for first in receiving touchdowns (8). At the helm of Colorado’s passing attack is quarterback Nick Stevens, who’s compiled 21 passing scores and 12 interceptions on 62 percent completion.

As mentioned earlier, Colorado State’s defense has been a liability this year against the run. But while they’re easy targets for Nevada’s rushing attack, the Rams at least have nothing to worry about when it comes to the Wolf Pack’s anemic passing game. On the season, Nevada is averaging just 172.1 passing yards per game, ninth in the conference.

Colorado State is 3-1 ATS in its last four games as faves.

Create a betting account now and cash in on all the NCAAF bowl games.