The Minnesota Vikings ushered in the Mike Zimmer era in style as they clobbered the St. Louis Rams in Week 1’s least-watchable game. They will now face the New England Patriots who are surprisingly at the bottom of the AFC East team standings after losing to the Miami Dolphins on opening day.

Can Tom Brady and the Patriots bounce back from their opening day setback? Or will the rejuvenated Vikings pile more misery on Bill Belichick’s men? Read on for a complete preview of this showdown and while you’re at it, check out our preview of the Philadelphia Eagles vs. Indianapolis Colts game.

The New England Patriots offense crumbled in the second half in Week 1 as they let slip a 10-point halftime lead to lose 20-33 to the Miami Dolphins on opening day.

[sc:NFL240banner ]It was the first Week 1 loss for New England since 2003 and it leaves them at the bottom of the AFC East standings after the Bills, Jets and the Dolphins all won on Sunday.

It was a bitter pill to swallow for head coach Bill Belichick and quarterback Tom Brady as the Patriots were in complete control of the proceedings in the first half. Brady threw a touchdown pass to Rob Gronkowski and Shane Vereen scored a rushing touchdown for the Pats as they stormed to a 20-10 lead heading into the break.

The Patriots were 16-1 in their last 17 games where they established a double-digit halftime lead but Miami emerged from the dugout a different animal as they crushed New England 23-0 in the second half to pull off the victory.

Tom Brady struggled in the second half as he was sacked four times in New England’s opening four possessions, two of which led to fumbles. He finished the day 29-of-56 for 249 yards and a touchdown.

Apart from their second half offensive struggles, the Patriots need to address their rushing defense ahead of their game against the Vikings who bring a more intimidating running attack to the table, led by the frightening Adrian Peterson. They allowed the Dolphins to run for 191 yards with Knowshon Moreno the main thorn to the Pats side as he led all Dolphins with 134 rushing yards. 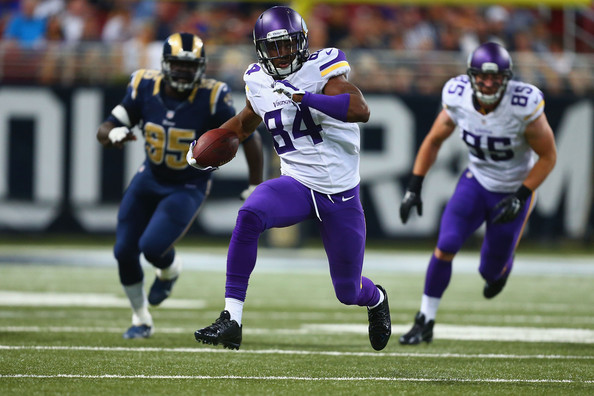 The Minnesota Vikings opened their 2014 NFL season with a bang as they walloped the injury-plagued St. Louis Rams 34-6.

Wide receiver Cordarrelle Patterson ran for 102 yards on just three carries, including a stunning 67-yard touchdown run in the third quarter that effectively sealed the fate of the Rams. He also reeled in three catches for 26 yards for good measure as the Vikings recorded their biggest opening-day win since defeating the Houston Oilers 38-7 back in 1989.

Quarterback Matt Cassel contributed as well for Minnesota, completing 17-of-25 passes for 170 yards and two touchdowns.

It was a great start for new coach Mike Zimmer who was brought in by the Vikings specifically for his defensive know-how. He was a defensive coordinator in Dallas, Atlanta and Cincinnati during the previous 14 seasons and was tasked to guide a Vikings team that surrendered the most points in the NFL last season.

So far so good as the Vikings limited the Rams to only six points on Sunday, but this game should come with an asterisk as St. Louis is still reeling from the news that their starting quarterback Sam Bradford will be out again for the entire season because of an ACL injury.

The real test will come this Sunday as they face quarterback Tom Brady and the rest of the New England Patriots who are eager to bounce back from their opening day loss to the Miami Dolphins. In order for the Dolphins to go 2-0, they will need to replicate the lockdown defense that they demonstrated against the Rams in Week 1.

They held St. Louis to only 170 yards through the first three quarters as they employed a variety of exotic blitzes that left the Rams in a complete daze. Zimmer’s men registered five sacks, eight quarterback hits and a Harrison Smith pick six in a dominating defensive performance. If Minnesota can get to Brady the way that the Dolphins did, the Pats could be in for a long day.

The Vikings were 5-3 in their eight home games last season and will be looking to get their home record off on a strong foot in Minnesota Sunday.

The Vikings shock the Patriots and preserve their unbeaten record.