After finally exorcising their playoff road woes with a win in Philadelphia last Saturday, the road trip continues for the Saints as they return again to brave CenturyLink Field for an NFC Divisional Round match-up against the well-rested Seahawks.

New Orleans will have a chance for payback Saturday when they face the team that clinched a playoff berth by beating them badly in Week 13. That team is the Seahawks, who neutralized the Saints’ offense for a 34-7 home win.

The loss was symptomatic of the Saints’ struggles this season on the road. The Saints finished with a 3-5 SU road record in the regular season. Hopes weren’t running that high in the wild card game for the Saints, who came in as 3-point underdogs versus Philadelphia.

Nevertheless, Drew Brees and gang booked a trip to Seattle anew for an NFC Divisional Round playoff match when kicker Shayne Graham played the hero in the wild card game by making a 32-yard field goal as time expired, lifting the Saints to a dramatic 26-24 win over the Eagles.

The Saints weren’t in their best shape against Philadelphia offensively, but their defense stepped up big time when it put the clamps on the high-octane rushing game of the Eagles. The Eagles led the NFL during the regular season with 160.4 rushing yards per game, but were limited to just 80 in the wild card match.

The Saints enter Saturday’s game versus Seattle going 2-0 SU and ATS in their last two games. They are also 7-1 UNDER in their last eight games overall. 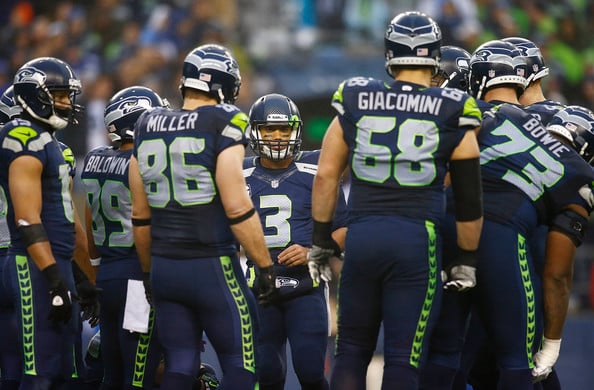 The NFC West champion Seahawks aren’t merely happy to be division title owners — they want to go all the way. After all, from preseason right up to the end of the regular season, their odds of winning the championship have been better than most. [sc:NFL240banner ]

Seattle’s first postseason step towards achieving that goal will be a home game against New Orleans, a team they beat five weeks ago at CenturyLink Field. The Seahawks will try to have a déjà vu performance on Saturday against the Saints, who they limited to just 188 total yards.

The Seahawks finished the regular season with a 7-1 SU home record. The team enters the playoffs with a 3-1 ATS mark in their last four home games.