The Islanders didn’t disappoint in their first-ever playoff game at Barclays Center. New York edged past Florida, 4-3, in overtime to take a commanding 2-1 series lead. The Isles will look to sustain the momentum of that huge win when they lock horns with the Panthers in Game 4 this coming Wednesday.

Who will emerge victorious in this critical playoff clash? Read on for an in-depth breakdown of this explosive Eastern matchup. In the meantime, get your playoff hockey fix with our complete Game 4 previews for the Flyers vs. Capitals and Wild vs. Stars.

Thomas Hickey certainly has a knack for the big moments.

Hickey scored 12:31 into the extra period to lift the New York Islanders to a stunning 4-3 victory over the Florida Panthers in Game 3 of their first-round series. He has now scored two overtime winners in New York’s last seven games. It was a huge comeback win for the Isles who erased a two-goal second-quarter deficit.

The Isles will look to send the Panthers to the brink when they square off in Game 4 this coming Wednesday. The Islanders will fancy their chances of doing just that as they have the in-form John Tavares in their ranks. He dished out two assists on Sunday to stretch his point tally in this series to six. Tavares now has two goals and four assists in the series, and nine goals and 11 points in his last 13 outings. Also expected to contribute in Game 4 is the versatile Kyle Okposo. He has two goals and nine assists in his last seven games.

Apart from Tavares and Okposo, they will also need Thomas Greiss to continue his excellent play between the pipes. He stopped 36 of 39 shots in Sunday’s overtime win over the Panthers. He is having a strong postseason thus far, posting a .922 save percentage through three games.

The total has gone over in the Isles’ last four home games.

The Stanley Cup Playoffs are finally here! Create a betting account now and cash in on all the exciting NHL action. 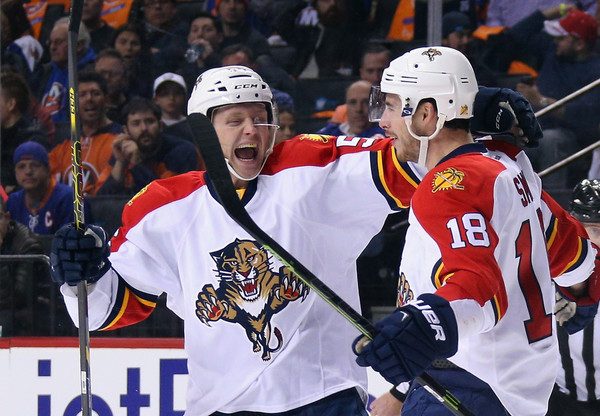 There are plenty of question marks surrounding Florida’s defense heading into Game 4 of their showdown with the New York Islanders. Twice now in this series, the Panthers have squandered leads to lose games. Veteran netminder Roberto Luongo looked out of sorts in Game 3, allowing four goals on 39 shots in Sunday’s defeat to the Islanders.

Luongo, the oldest goalie in the playoffs at 37 years of age, has struggled mightily in the playoffs of late, losing eight of his last nine postseason starts. Luongo’s .907 save percentage in Round 1 ranks 13th among 17 goalies who had played in two or more games thus far. The Panthers hope this upcoming two-day break will help recharge Luongo’s weary body for Game 4.

With their defense in tatters, the onus is on Florida’s attack to lead the way in Game 4. The good news for the Panthers is that Reilly Smith is firing on all cylinders right now. He leads the league in scoring this postseason with eight points to his name. He scored the opener in Game 3 to hike up his goal tally in this year’s playoffs to four. Smith also had two assists on Sunday.

The Islanders (-115) edge past the Panthers in another high-scoring affair.