The Houston Texans made quite a bang on Monday night, handing Cincinnati’s first loss of the season. The New York Jets disappointed a week ago, losing at home on Thursday night. The two teams now meet in a pivotal Week 11 of the 2015 NFL Regular Season. Both teams need a win to keep their own playoff hopes alive. Who takes this crucial matchup in the AFC?

There’s plenty more football to get you going. Check out our complete previews for the Chiefs vs. Chargers and Rams vs. Ravens.

The New York Jets were rather unspectacular in welcoming former head coach Rex Ryan back to the Meadowlands in a 22-17 loss to the Buffalo Bills. The Jets struggled to get much off their passing game as quarterback Ryan Fitzpatrick completed just 15 of 34 passes for 193 yards with two touchdowns and two interceptions.

[sc:NFL240banner ]Fitzpatrick is due for another bad outing against the excellent defense of the Houston Texans, who limited Cincinnati’s Andy Dalton to 197 yards and an interception on Monday night. The Texans are allowing just 222.4 yards passing per game this season, fifth in the league. But if there’s a dynamic receiving duo to lift Fitzpatrick’s game, it’s the Jets’ Eric Decker and Brandon Marshall.

Decker was one of New York’s bright spots against Buffalo, catching six passes for 85 yards and a score. He has now caught a touchdown in three straight games and seven of the last eight. In case Decker gets shut down, Marshall is there to save the day. While he was limited to just 23 yards Thursday night, Marshall caught one of Fitzpatrick’s scoring passes.  But if the Jets are to dominate this game, they’ll need to get Marshall in form much like his four-straight 100-yard games from Weeks 2 to 5.

Running back Chris Ivory was the brightest spot on Thursday night. He ran for 99 yards on 18 carries to spur the Jets’ offense. Ivory is primed for a big game against the Texans’ patchy rushing defense, allowing 117.9 yards per game (25th in the league). If the Jets are to win this game, it’ll be through a big game from their star running back.

On the other side of the ball, the Jets could limit Houston’s passing game with their pair of shutdown corners. Darelle Revis and Antonio Cromartie should be able to keep tabs on Houston’s receivers. Revis should draw matchups against Houston’s go-to receiver DeAndre Hopkins. He could be up for a pick or two against the Texans’ Brian Hoyer (if cleared to play) or inexperienced fifth-year quarterback T.J. Yates.

Betting on the Houston Texans (4-5) 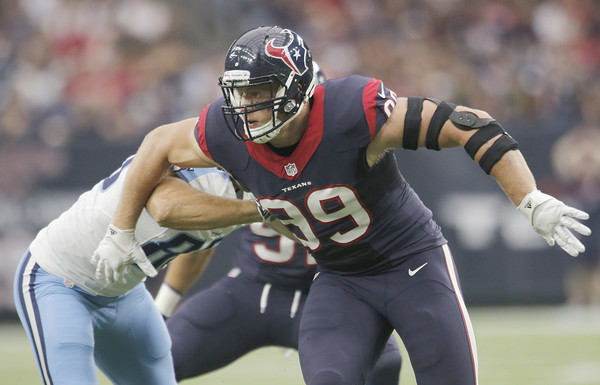 Bengals killer T.J. Yates had quite a game as Houston’s backup quarterback in Monday night’s 10-6 upset victory over Cincinnati. Yates drove the Texans 79 yards on nine plays, including the game-winning 22-yard touchdown pass to DeAndre Hopkins, after replacing Brian Hoyer (concussion). It remains to be seen whether Hoyer can pass the team’s concussion protocol, leaving his status for this game up in the air.

Having a backup like Yates, who went 5 of 11 for 69 yards in a little over a quarter of play, directing the offense may not inspire too much confidence in the Texans. Houston will need their rushing offense to step up after contributing just 82 yards on 25 carries on Monday night. Alfred Blue has been horrid after replacing Arian Foster (Achilles) as the starting running back on November 1, rushing for under 40 yards in back-to-back games.

With the offense pretty much in shambles, the Texans defense will need to be at the top of its game if they are to escape with a win. Houston has been stingy recently as they haven’t allowed a touchdown in nine straight quarters of play.

Defensive end J.J. Watt should be a solid threat against New York quarterback Ryan Fitzpatrick. Watt now ranks second in the league with 9.5 sacks this season. But he faces a very solid Jets offensive line, which has allowed just 10 sacks this season (a league-low).

Don’t count out Watt and the rest of Houston’s front seven just yet. They managed to tally three sacks against Cincinnati’s Andy Dalton, who happens to be protected by a solid offensive line. Before Monday night, the Bengals had allowed just 11 sacks this season. Expect Watt to be a terror against the Jets this coming Sunday.

The total has gone over in four of Houston’s last five games.

The Jets have more weapons on offense, which translates to a narrow victory over Houston. Don’t miss out on all the exciting football games this year. Create a betting account now and join in on the fun.