No. 8 Gonzaga Bulldogs vs. No. 9 Oklahoma State Cowboys – March Madness Round of 64 – Preview and Prediction

The Oklahoma State Cowboys managed to defy the odds and make it to the NCAA Tournament by showing enough moxy to compile crucial wins late in the season. Meeting them in the first round of the Big Dance are the Gonzaga Bulldogs, who are fresh off a dominating run in West Coast Conference Tournament.

This game, like some of the other 8 vs. 9 games, will be key in predicting a clean March Madness bracket. Read on for everything you need to know to make an informed decision.

[sc:NCAAB240banner ]After surviving a scare in the West Coast Conference tournament quarterfinals against Santa Clara, 77-75, the Bulldogs proceeded to win their next two games, both in convincing fashion. The Bulldogs advanced to their 17th-straight conference finals appearance by thrashing St. Mary’s in the semis, 70-54, as 7-point favorites, before adding to their trail of success in the WCC by beating BYU in the championship game, 75-64, for their 12th WCC tourney title.

Having earned a spot in the Big Dance for the 16th-straight season, the Bulldogs will need to be efficient on offense to carry them past the first round. The ‘Zags own the nation’s no. 5 field goal percentage of 49.8%, so that should be doable for them. They shot no lower than 46% in three of their games in the WCC tourney, including a 53.3% clip against Santa Clara. Gonzaga is 5-0 SU and 4-1 ATS in its last five games. 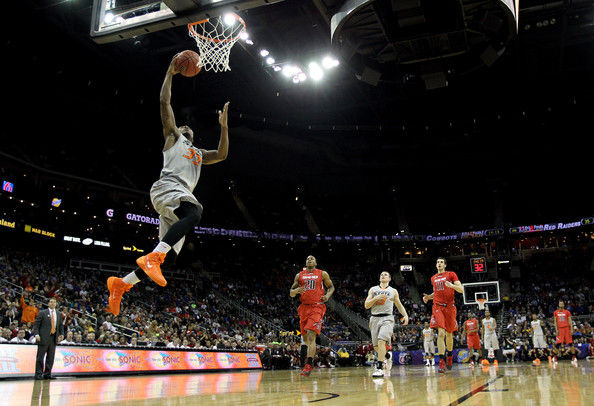 Oklahoma State is going dancing after all. After a debilitating seven-game losing skid mid-way through conference play that put them on the bubble, the Cowboys rebounded down the stretch with a 4-1 SU record. It included back-to-back wins against no. 5 Kansas and Kansas State before succumbing to Iowa State in overtime of the Cowboys’ last game of the regular season.

Similar to Gonzaga, offense is the strength of the Cowboys. They are averaging 80.3 PPG, good for no. 16 in the nation. Look for the Cowboys to get big numbers from prolific sophomore Marcus Smart, who is leading the team in scoring (17.8 PPG) and assists (4.7 APG). However, Smart has also three other teammates that could score whenever needed. Markel Brown, Le’Bryan Nash, and Phil Forte III are all scoring 13.3 PPG or better.

Prediction – The Cowboys Make the Second Round

Gonzaga comes up short in a shootout with the Cowboys. Obviously a match between two elite offensive teams, the total will easily clear the line for this game.

Do you think Mark Few’s team will surpass their third round exit last year? Or Marcus Smart and the rest of the Cowboys cut their dreams short? Bet on this game now.