The NFL season is upon us and the excitement is slowly building ahead of the much-anticipated kickoff. We take an early look at every team’s offseason prospects, training camp updates, and 2014 previews. Read on for everything you need to know about the Oakland Raiders and for more AFC West previews check out our Denver Broncos and San Diego Chargers pieces.

After consecutive 4-12 seasons and finishing dead last in the AFC West last season, Oakland Raiders general manager Reggie McKenzie decided enough is enough. With an impressive haul in both the free agency market and the 2014 NFL Draft, the Raiders are determined to challenge in a very tough AFC West division.

Since losing the Super Bowl to the Tampa Bay Buccaneers in a 48-21 massacre in 2002, the Oakland Raiders have become the laughing stock of the NFL. During that 11-year span, the Raiders have amassed a 53-123 record, finishing bottom of their division five times.

[sc:NFL240banner ]With the arrival of Reggie McKenzie back in 2012 as the new general manager, the Raiders finally had a plan to return to relevancy. His first order of business was to rid the Raiders of their huge contracts. Before the 2012 campaign, the Raiders were $22 million over the cap but heading into the current season, the Raiders have freed up around $60 million in cap space.

Even with the Raiders undergoing a major transition, they were able to contend in the first part of last season. In their first seven games, they posted a 3-4 record where they allowed only 21.4 points per game. The next nine games, however, were a horror show as they allowed 33.7 points per game during a disastrous 1-8 SU slide to finish the season at 4-12 SU.

Even with Oakland grabbing some key free agent acquisitions, the Raiders are still huge longshots to win the Super Bowl at +10,000. 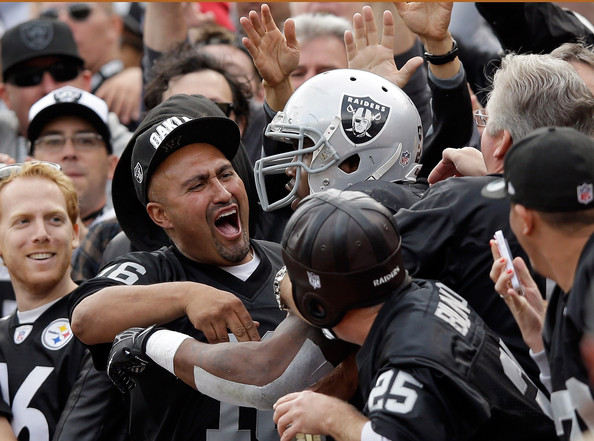 With plenty of cap space to work with, Reggie McKenzie made sure he got busy this past offseason with the Raiders re-signing defensive tackle Pat Sims and free safety Charles Woodson. He also signed defensive ends Justin Tuck and LaMarr Woodley as well as defensive tackle Antonio Smith to further strengthen his defensive line and improve a defense that was 28th in opposing passing yards.

Mckenzie also strengthened the cornerback position with the signings of former San Francisco 49ers Tarell Brown and Carlos Rogers to fortify a secondary that had been severely lacking the past two seasons.

The Raiders also addressed their offensive needs particularly in the quarterback position signing veteran Matt Schaub. After a disappointing end to his Houston career, Schaub is determined to prove his critics wrong and prove that he can still deliver the goods.

Apart from dabbling in the free agency market, the Raiders also struck gold in the NFL Draft by getting Khalil Mack as the fifth overall pick. Mack was highly-rated heading into the draft, with some even touting him as a better pass rusher than no. 1 overall pick, Jadeveon Clowney.

It seems unfair that even with the Raiders’ subpar record last year, they have the toughest schedule in the league this season.  That is one of the major reasons why their totals is still set at 4.5 even with the improvements they have made in the offseason. Two of those games in that schedule are:

The Raiders face an early test in Week 3 as they tackle the New England Patriots in a showdown in Massachusetts, as Matt Schaub will try to outmaneuver the Pats’ defense, and outsmart Tom Brady.

The Raiders host the defending AFC champions Denver Broncos in a matchup that will test the readiness of this newly-assembled Raiders squad. The Raiders are 1-4 ATS in their last five home games against their AFC West rivals.

The Raiders with their new crew will go over 4.5 wins and improve on their 4-12 mark but will still finish bottom of the AFC West. Create a betting account now and see if you can predict where the Raiders will finish in the AFC West.