The Oakland Raiders are for real, hanging tough against their competition this season. But they suffered a pair of bad beats the past two games, losing a 22-20 heartbreaker to the Chicago Bears and a tight 16-10 loss to the Denver Broncos right before their Week 6 bye week. The Raiders travel to San Diego next in a repeat of a thrilling shootout last season. Can the Raiders finally best their AFC West rivals?

Check out more of this week’s thrilling divisional matchups in AFC East’s Jets vs. Patriots and NFC North’s Vikings vs. Lions.

Betting on the Oakland Raiders (2-3)

The Oakland Raiders’ rebuilding started with Derek Carr last season. It continued this year with No. 4 overall pick Amari Cooper. Carr has been solid this season with two 300-yard games; he’s thrown for a combined eight touchdowns in the past four games. He’s also limited his interceptions with just three picks this season. Cooper has two 100-yard games so far and has been receiving the lion’s share of targets in the receiving corps.

[sc:NFL240banner ]The pass-catch tandem of Carr and Cooper could struggle against San Diego’s solid pass defense though. The Chargers shut down Green Bay’s top two receivers in James Jones and Randall Cobb in Week 6, limiting them to a combined 4 of 10 catches for 68 yards.

Carr will need his other receivers to step up. Michael Crabtree could be solid with 318 yards and a touchdown this season. Even fullback Marcel Reece has been heavily involved in the receiving corps with 98 yards and a team-leading three touchdowns.

Oakland’s running game could explode in this game. Lead running back Latavius Murray has played pretty well with 336 yards rushing and two touchdowns. The Chargers have been pretty vulnerable against the run with a league-high 5.4 yards per carry allowed to opposing backfields. They’ve allowed the most runs of 20-plus yards (10) this season.

The Raiders are in trouble if they can’t limit Chargers quarterback Philip Rivers. They’ve allowed a little less than 300 yards per game this season. But the Raiders do have a couple of players in their secondary who could intercept Rivers’ passes. Free safety Charles Woodston leads the team with four interceptions, two against Peyton Manning in Week 5. Neiko Thorpe had an interception in Week 4 against Chicago.

Oakland is 5-1 ATS in its last six trips to Qualcomm Stadium.

Betting on the San Diego Chargers (3-4) 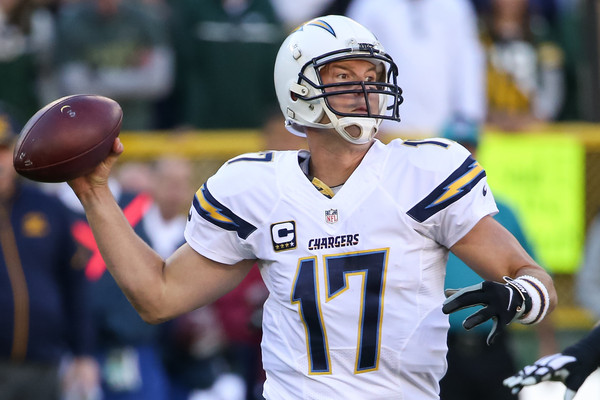 Philip Rivers was sensational Sunday afternoon, setting franchise records for completions (43), attempts (65) and passing yards (503). Rivers threw two touchdown passes and no interceptions. While getting another 500-yarder is a tall task even for Rivers, he could get another monster game against the Raiders. He threw for a total of 506 yards and four touchdowns in two matchups against Oakland last year.

Rivers has benefitted greatly from the return of tight end Antonio Gates, who was suspended for the first four games this season due to violating the league rules for performance enhancing drugs. Gates led the Chargers with 12 receiving touchdowns last season. He has back-to-back 90-yard games and two total touchdowns in his first two appearances this season, receiving the lion’s share of Rivers’ passes.

Gates isn’t the only weapon in the receiving corps, though. Wide receivers Keenan Allen and Malcom Floyd had pretty solid games against the Packers in Week 6. Allen caught a game-high 14 catches for 157 yards, while Floyd caught five passes for 95 yards. The Chargers’ passing game should be able to thrive against Oakland’s leaky pass defense which allows about 300 yards through the air per game.

The Chargers have a pretty solid passing defense that could limit Oakland’s passing game on the other side of the ball. San Diego is allowing just 218.8 yards passing per game, seventh in the league. The secondary also has some pretty solid players who could cause some turnovers. Cornerback Patrick Robinson has an interception and a fumble this season; safety Jimmy Wilson and cornerback Steve Williams have an interception each.

The Chargers are 1-4 ATS in their last five at home.

The Raiders outgun San Diego for a road upset. Create a betting account now and get in the mix of all the NFL shootouts.