The Bedlam Series continues when the Sooners barge into Cowboys territory with the mission of stopping their rivals from finishing with the Big 12’s best record. It figures to be easier said than done, as the Cowboys haven’t lost at home since last season.

Betting on the Oklahoma Sooners:

In their last meeting, the Sooners prevailed over nemesis Oklahoma State (51-48) in overtime on the strength of a huge 500 passing yard performance from Landry Jones. Jones is no longer with the team, but either Blake Bell (if healthy) or Trevor Knight could duplicate Jones’ exploits in this edition of the Bedlam Series.

But more often than not, it’s the defense that stars for Oklahoma. The Sooners are 21st in the FBS in scoring defense, allowing opponents to just 21.1 PPG. Their passing defense ranks 14th, limiting opposing arms to 197.8 yards per game in the air.

Oklahoma beat Kansas State, 41-31, in their last game. Brennan Clay ran for 200 yards and two touchdowns on 31 carries to lead the Sooners. Knight filled in well for the injured Bell, throwing 171 yards and a touchdown with only one interception

Bet now on the Oklahoma Sooners.

Betting on the Oklahoma State Cowboys: 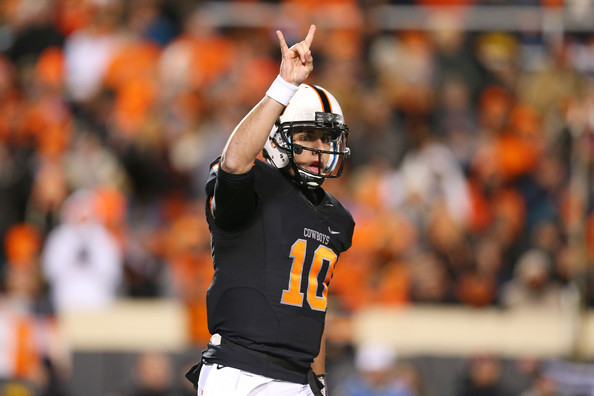 The last team that visited the Cowboys at Stillwater went home with their dreams crushed. This time, Oklahoma State looks to prevent their own hopes of a Big-12-best record from being spoiled. [sc:NCAA240banner ]

Despite a two-week layoff, adrenaline is still running high for the Cowboys after pulling off a big 49-17 upset win over then undefeated Baylor last November 23. The Bears were in the thick of the BCS Bowl chase until Oklahoma State brought down the hammer.

The Cowboys’ defense was at its best in that game, tightening the clamps on the highest scoring team in the nation as they limited Baylor (55.4 PPG – #1 in FBS) to just 17 points.

Led by QB Clint Chelf, who threw for 370 yards and three touchdowns, the Cowboys served Baylor a taste of their own medicine with a dazzling 594 total yards of offense in that game.