The No. 12 Oklahoma State Cowboys put their perfect record on the line again this coming Saturday, as they make a trip to Lubbock, where the Texas Red Raiders look to recover from the severe beatdown they received from No. 17 Oklahoma last week. The Cowboys have won all of their last seven meetings with Texas Tech. Will their domination of the Red Raiders continue?

Read on for a preview of this matchup. You can also click here for a breakdown of the matchup between Florida and Georgia.

Betting on the Oklahoma State Cowboys (7-0)

[sc:NCAA240banner ]Tragedy struck Stillwater last Saturday, when four people were left dead by a wayward car just outside of the Boone Pickens Stadium. The best the Cowboys could do, however, was to mercilessly beat Kansas and somehow brighten up the understandably glum atmosphere.

Against the Jayhawks, Oklahoma State pumped out 583 total yards, with quarterback Mason Rudolph doing most of the work. The sophomore signal-caller had a field day slicing through Kansas’ defense, as he passed for 305 yards and a touchdown on 20 of 26 attempts. Rudolph might have that kind of domination against Texas Tech, considering the Red Raiders’ cotton-soft defense that allows 280.0 passing yards per game.

In addition, the Cowboys’ backfield that lit Kansas up for 202 rushing yards and four touchdowns is also staring at Texas Tech’s defense that lets opponents put up 281.50 yards on the ground per contest.

Moving the chains hasn’t been that hard for Texas Tech’s opponents, so look for Oklahoma State’s offense to click once again this coming Saturday. Overall, Oklahoma State is averaging 480.1 total yards thus this year.

Oklahoma State is 6-0 SU and 5-1 ATS in its last six meetings with the Red Raiders. 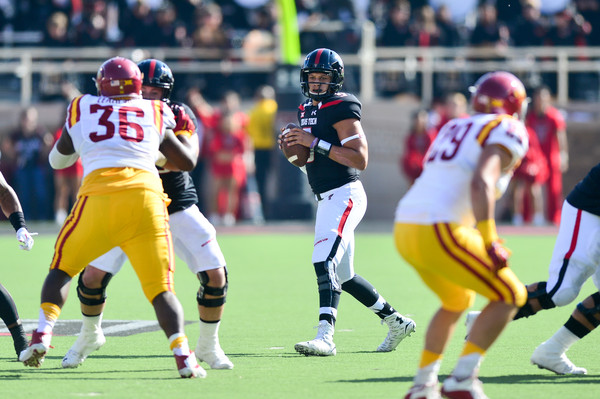 Defense has been the Waterloo of Texas Tech this season. That point was once again driven home on Saturday, when the Red Raiders suffered a 63-27 annihilation at the hands of Oklahoma.

Every crack on Texas Tech’s defense was exploited by a merciless Oklahoma team that racked up 617 total yards. The Red Raiders’ defense against the run was particularly put to shame by the Sooners, who picked up 405 yards on the ground. In fact, it took only two Sooners in Samaje Perine and Joe Mixon to cover 355 of those rushing yards.

It would’ve been a much closer game if it weren’t for a letdown performance from Patrick Mahomes, who passed for a season-low 233 yards with only a touchdown with four interceptions on 26 of 40 attempts.

Albeit against a tough Oklahoma State defense, Mahomes will look to bounce back next week along with favorite target Jakeem Grant. Grant was held down to only 55 receiving yards on seven catches against the Sooners. The game against Oklahoma State should be the biggest test yet for Texas Tech’s passing attack that ranks third in the FBS with 405.1 yards per game and sixth with 24 touchdowns.

Texas Tech’s backfield, on the other hand, did look better in the Sooners game, as DeAndre Washington and Mahomes combined for 148 rushing yards and two touchdowns. The Red Raiders are mustering 195.13 yards on the ground per contest.