The undefeated and No. 15 Oregon Ducks find themselves in Vegas later tonight, when they play a non-conference game against the dangerous UNLV Rebels. Will the Ducks extend their unbeaten streak? Or will UNLV beat another ranked team to boost its March Madness credentials?

Read on for more about this game. You can also click here for the preview of Michigan State vs. Louisville.

[sc:NCAAB240banner ]The Ducks can’t be stopped. Despite Fresno State’s best efforts, Oregon managed to survive the Bulldogs’ late rally on Monday to end up with a 78-73 win. It was the Ducks’ sixth-straight victory to start the season.

The win over Fresno State, however, was too close for comfort for the heavily favored Ducks. Oregon closed the first half with a 12-point lead, but the Ducks were outscored in the final two periods, 48-41. Fortunately for Oregon, Dillon Brooks was there to save the day, as the sophomore forward scattered 13 of his game-high 22 points in the second half. The Ducks can’t afford to take off their feet off the gas next time out, as they’re about to face the streaking UNLV, which is one of the highest scoring teams in the nation.

Save for that Fresno State game, the Ducks have been a solid team defensively. They are allowing just 62.6 points per game, mostly because they are terrific in defending at the rim.  Oregon is currently ranked 13th in the nation in opponents’ field goal percentage at the rim (38.3%) and sixth in block with 6.8 per game. That’s not good news for the Rebels, who are generating most of their offense inside, as they are taking more than half of their shots at the rim per Hoop Math.

Oregon is 4-1 ATS in its last five road games. 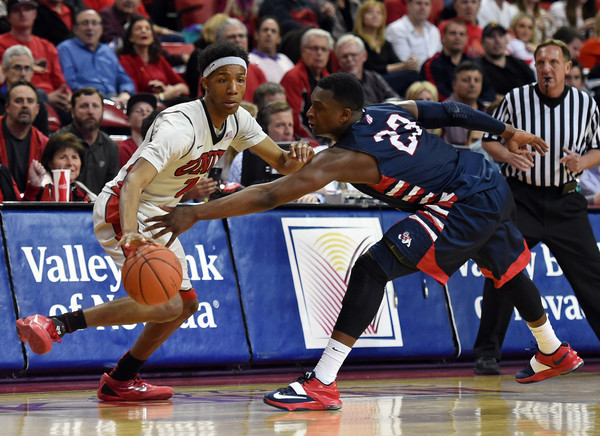 It hasn’t been fun to cross paths with the Rebels this season. UNLV, which victimized then-No. 13 Indiana in Hawaii last week, kept its win streak alive on Saturday, when the Rebels handed the Prairie View A&M Panthers an 80-62 beating.

The Rebels have been doing solid job on both ends of the floor over their last three games. During that stretch, they’ve averaged 81.7 points, while allowing just 68.0.

Guard Patrick McCaw has been the UNLV’s best scorer this season, as the sophomore guard is averaging 19.0 points per game, while dishing out 4.4 assists. McCaw was at the forefront of UNLV’s attack when it took down Indiana, scoring 20 points and adding six assists and five steals. The do-it-all 6-7 guard is getting ample help from Derryck Jones Jr. and Jerome Seagears, who are putting up 13.0 and 11.5 PPG, respectively.

Seagears missed the game against the Panthers due to a flu, but should be good to go when the Rebels take on Oregon. Jones, meanwhile, is coming off a 14-point performance. Jones is a crucial piece in UNLV’s bench, and he’ll have to do it again later tonight to help UNLV keep in step with Oregon’s offense that averages close to 80 PPG.

UNLV is drawing strength from its terrific rebounding, as the Rebels are hauling down 40.9 boards per game. However, they were out rebounded by in the Prairie View game, 38-35.

UNLV is 4-2 ATS in its last six games overall.