Two struggling NFC East teams are set to collide this coming Sunday at FedExField, when the 1-2 Washington Redskins host the 1-2 Philadelphia Eagles. Will the Eagles show that they’re really past their troubles with a win at Washington? Or will the Redskins prevent a two-game slide?

For more Week 4 game previews, you can also read our breakdown of Ravens vs. Steelers and Panthers vs. Bucs.

[sc:NFL240banner ]The Eagles have landed onto the win column. That’s after Chip Kelly guided Philly to its first victory of the season on Sunday, defeating the streaking New York Jets on the road, 24-17. Up next for the Eagles is a game in Washington, where they are 5-2 SU and ATS in their last five trips.

The win over the Jets came as a bit of a surprise for the Eagles, who were three-point underdogs prior to the game. They were without the services of DeMarco Murray, who was marked inactive because of a hamstring injury.

Instead, the Eagles relied on backup Ryan Matthews and the rejuvenated play of Sam Bradford. Matthews had a field day running circles around the Jets’ defense, as he finished with 108 rushing yards on 25 carries. Bradford, on the other hand, threw for 118 yards and one touchdown with no picks—the first time he hasn’t thrown one this year.

Murray could be back next week so the Eagles might have enough firepower in the backfield to plow through Washington’s defense. That said, Washington’s rushing defense is among the best in the NFL, allowing just 78.33 yards on the ground per game. Bradford will have to parlay his efficient outing in the Jets game into another gem next Sunday in order to take away some defensive pressure of Murray and company.

As for the defense, the Eagles finally showed some teeth in Week 3, as the team came away with three interceptions. Kirk Cousins isn’t among the most accurate passers out there, so watch out for Philadelphia forcing the Redskins’ quarterback into committing errors. 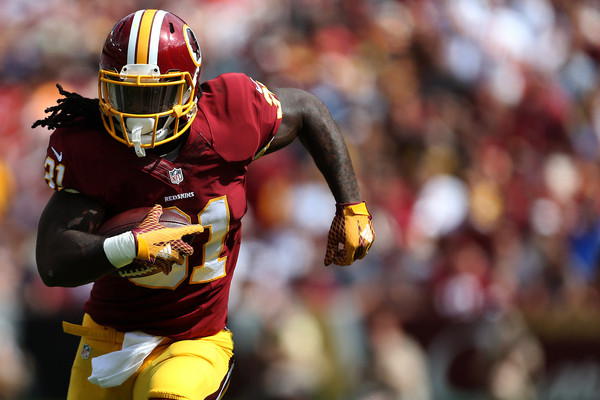 Following a rousing win at home against the Rams in Week 2, Washington came back down to earth, as the Redskins were torched by the New York Giants on Thursday, 32-21.

Once again, Kirk Cousins played like a glorified backup. Cousins threw for 316 yards—most of which came in garbage time—and a touchdown with two interceptions on 30-for-49 passing. Cousins’ inability to connect consistently with his receivers has been an issue so far this season. He’ll have to recover from that bad outing quick or else be a deer in the headlights of the aforementioned improving passing defense of Philadelphia.

Cousins may have an easier job next week, though, should DeSean Jackson return to the field. Jackson has seen very little playing time this season because of hamstring ailment, but is reportedly close to getting back to action.

In any case, Washington’s backfield will have to carry a big load. With the Redskins’ passing game in shambles, Alfred Morris and rookie Matt Jones should see more touches moving forward.

Morris, however, has seen his numbers gradually dwindle in three games. After rushing for 121 yards in Week 1 against Miami, Morris put up just 59 and 19 yards on the ground versus St. Louis and New York, respectively. Jones, on the other hand, had 123 rushing yards in the Rams game but mustered just 38 against the Giants.

Washington’s defense, which is surrendering just 202.3 passing yards per game, took a blow after learning that cornerback DeAngelo Hall will miss at least three weeks because of a partial tear in his right foot.

The under is 6-1-1 in Washington’s last eight home games.