One win separates the Tampa Bay Lightning and the Stanley Cup Finals. Hell-bent on making another trip to the league finals, the Bolts eye to end their series with the Pittsburgh Penguins later tonight at home. Will the Lightning send Pittsburgh packing? Or can the Pens force a Game 7?

Over in the NBA, Steph Curry and the Golden State Warriors will try to prevent falling in a 3-1 hole in their series against the Oklahoma City Thunder. Read a preview of that series’ Game 4 here.

So who’s going to get the start in Game 6, Marc-Andre Fleury or Matt Murray? Fleury made his first start of the series in Game 5, but had a lackluster performance in a 4-3 overtime loss.

Fleury allowed all four of Tampa’s goals on just 25 shots faced and could lose the starting gig again to rookie backup Murray. While Murray has been a very good goalie this postseason, Fleury’s vast experience in critical games remains an asset for the Penguins, who are allowing 2.50 goals per game thus far these playoffs.

Should Murray’s number be called to start, he’ll be looking to help the Pens prolong their season and improve his current playoff win-loss record of 9-4-0 to go with a 2.33 GAA and .923 SV%.

The HBK line of Carl Hagelin, Nick Bonino, and Phil Kessel has been the toast of the series for the Pens, but a win-or-go-home game like the one this Tuesday calls for stars Sidney Crosby and Evgeni Malkin to show up. Crosby needs to be more aggressive after two-consecutive games of just two-shot efforts. Malkin, who had an assist in Game 5, only has one goal in the second round. 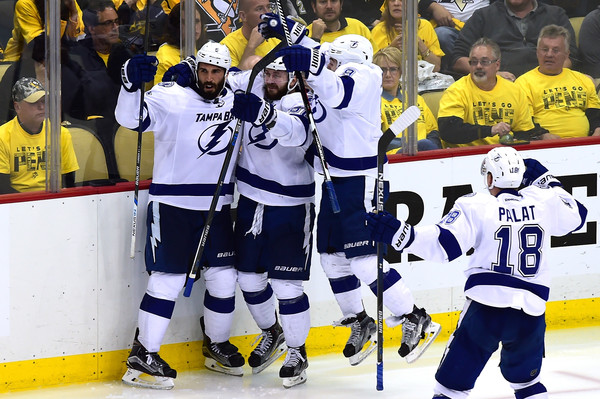 It’s not easy to bottle up the Lightning. Despite trailing 2-0 in the early going of Game 5, the Bolts still managed to claw their way out of that hole and win the match. They will look to clinch their second-straight ticket to the Stanley Cup Finals at home, where they are 7-3 in their last 10 games there.

The Triplet Line played like gold again in Game 5 with Ondrej Palat, Tyler Johnson, and Nikita Kucherov combining for three goals and three assists. The trio will be counted upon to deliver later tonight in support of the hardworking Andrei Vasilevskiy.

Tampa Bay is third in the playoffs with an average of 3.00 goals for per contest.

The Lightning’s offense has been playing with an extra burden given the absence of goalie Ben Bishop and Steven Stamkos. That’s not a knock on backup Vasilevskiy, who’s been a solid substitute for the Vezina Trophy candidate Bishop. Vasilevskiy stopped 31 of 34 shots in Game 5.

Vasilevskiy should get help from the team’s blue line, though, as he’s been getting a heavy workload since taking over as the starter. He’s faced no fewer than 34 shots in each of his last three starts.