The Pittsburgh Steelers got just what they needed on Week 17 in order to make the playoffs. The Cincinnati Bengals, however, weren’t as lucky as results conspired to see them lose that coveted first-round bye. The Bengals will now have an uphill battle to make it past the wild-card round, as they face their dangerous division rival Steelers, who have been right at home at Cincy for years.

Read on below for a complete preview all-AFC North wild card matchup. Meanwhile, don’t forget to check out our previews of the other three matchups from wild card weekend with the Chiefs vs. Texans, Seahawks vs. Vikings, and Packers vs. Redskins.

Betting on the Pittsburgh Steelers (10-6)

The Pittsburgh Steelers’ prayers were answered as a New York Jets loss coupled with their 28-12 win over the Cleveland Browns sent them back into the playoffs as the second AFC wild card.

[sc:NFL250 ]Despite looking less than impressive in the past two weeks against division opponents – they lost to the Ravens in Week 16 and led by just 17-12 early in the fourth quarter against the Browns – the Steelers will like their chances of putting on a much more impressive performance against the Bengals in Cincinnati.

The right ankle injury of running back DeAngelo Williams will be a little concerning, especially with only second-year back Fitzgerald Toussaint left in reserve. Williams injured his ankle against the Browns and did not return.

However, there’s a reason why Steelers finished fourth in the NFL in scoring (26.4 PPG). The biggest of which is that Big Ben Roethlisberger has enough weapons in his explosive passing game to put points on the board.

Antonio Brown, the league’s second-leading receiver with 1,834 yards, had his second game of 13 or more catches and 180 or more receiving yards in the last three weeks against Cleveland to make up for Williams’ absence.

Meanwhile, Cincy’s greater dependence on the run due to Andy Dalton’s likely absence will give the Steelers defense a much more advantageous matchup. The Steelers have been able to stop the run very well, and have limited the Bengals to just 3.6 yards per carry over their two meetings this season.

Create a betting account now and get in on the action with NFL’s wild card weekend.

Betting on the Cincinnati Bengals (12-4) 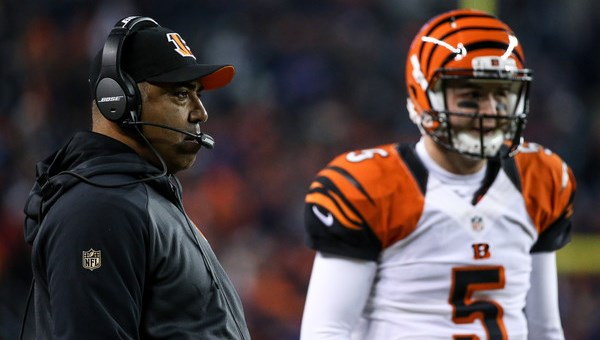 While the Steelers got the help they needed in Week 17, the Bengals did not. As a result, they lost out on a first-round bye despite beating Baltimore, and that much-needed extra week for quarterback Andy Dalton to try and return from his broken thumb.

That could leave the vastly inexperienced AJ McCarron to make a playoff start. McCarron has been competent in his three starts while running a somewhat watered-down Bengals offense. He has completed 65 percent of his passes and averaged 184 yards with four total touchdowns and no interceptions.

The Bengals offense has still been nowhere near as prolific, though. It’s averaged just 20.1 PPG in McCarron’s three starts, way down from the 27.8 it averaged with Dalton at the helm.

Despite throwing two INTs (including a pick-six) after coming in for Dalton in his first appearance of the year – a 33-20 loss to Pittsburgh last month – McCarron did get his fair share of success against the Steelers secondary with 280 passing yards and two touchdowns.

However, the Bengals don’t necessarily need McCarron to put up huge numbers to beat the Steelers, especially if Cincy’s second-best scoring defense (17.4 PPG) can play up to its potential and keep Pittsburgh within reach. That’s a very real possibility given how the Steelers offense struggled in the past two weeks against their two inferior AFC North rivals.

The Bengals also held the Steelers to just 10 points and picked Roethlisberger off three times in their win at Pittsburgh on Week 8.

The Steelers (–2.5) continue their dominance in Cincinnati by claiming a 31-17 win.