Who would’ve called it? The Kansas City Chiefs were 1-5 at one point in the regular season. But a franchise-record 10 straight wins have the Chiefs in the postseason as one of two Wild Card teams. The Chiefs’ path to the Divisional Round gets even sweeter, considering they’re playing the Houston Texans in the Wild Card Round. Kansas City opened their regular season with a 27-20 win at Houston.

The Texans battled some late season injuries to secure the AFC South Championship. Hosting a game for the Wild Card Playoffs will be huge considering they’ve been hot in NRG Stadium, going 4-1 in their last five at home.

There are plenty of sweet thrills waiting in this exciting Wild Card game. Read on for everything you need to know heading into this matchup. Get the most of the Wild Card experience with our complete preview for the Steelers vs. Bengals as well as the complete picks for each game here.

Betting on the Kansas City Chiefs (11-5)

With a 23-17 victory over Oakland on Sunday, the Kansas City Chiefs charged into the playoffs on the heels of a 10-game win streak, including a 29-13 victory over the AFC’s No. 1 seed the Broncos in Denver. The Chiefs have their defense to thank for their long win streak, allowing over 17 points just twice in the last 10 games.

[sc:NFL250 ]There’s plenty of reason to fear the Chiefs’ defense. The group is getting healthier with one of their top pass-rushers Tamba Hali returning against Oakland. Another, Justin Houston, returned to practice after missing the past five games with an injured knee. Even without Houston, Kansas City’s pass rush was to be feared. The Chiefs had a whopping six sacks in the regular season finale against Oakland.

Expect Houston to be ready to roll against the Texans as the Chiefs’ sacks leader (7.5). Houston had a sack in the regular season matchup between the two teams, a 27-20 Kansas City win. He’ll form quite a threat with Hali (6.5 sacks) also on the prowl in the front seven.

It’s not all the pass rush, though. Rookie cornerback Marcus Peters seems to have transformed the Chiefs defense. He led the team with eight interceptions, including two pick-sixes. The Chiefs had a total of just six interceptions last season; they had 22 this regular season.

Having a solid defense should help mask some less-than-stellar production from quarterback Alex Smith. He hasn’t thrown for over 191 yards in the past five games. But Smith could be up for a big game this time around. One of his best games of the season came against the Texans, throwing for 243 yards and three touchdowns.

With the way Kansas City’s backfield has been playing, the Chiefs haven’t had the chance to let Smith air out the ball more. The duo of Spencer Ware and Charcandrick West has been solid out of the backfield. Ware and West helped Kansas City to rush for over 150 yards against Oakland. But the Chiefs’ backfield tallied just 97 yards on 32 carries in the regular season matchup with then-healthy star running back Jamaal Charles leading the way.

Getting past the Texans’ front seven will be difficult for Ware and West, especially if Smith can’t move the ball through the air consistently.

The Chiefs have won four straight away from home, going 4-0 ATS.

Betting on the Houston Texans (9-7) 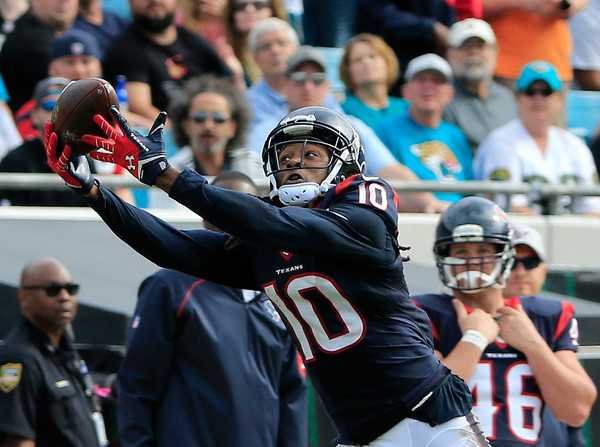 The Houston Texans clinched AFC South with a 30-6 drubbing of the Jacksonville Jaguars on Sunday. The Texans didn’t just win their division and enter the playoffs; they got one of their best weapons back in a two-handed J.J. Watt. Playing without a cast on his left hand for the first time in the past four weeks, Watt was a nightmare among the Texans’ defense.

Watt had three sacks, two batted passes, eight tackles, a forced fumble and a fumble recovery. He now leads the NFL with 17.5 sacks in the regular season. It wasn’t all Watt either. Whitney Mercilus had a career-high 3.5 sacks, forced a fumble and recovered another; Johnathan Joseph had a big day with four passes defended; Kareem Johnson had a pick-six; and Andre Hal had his fourth interception of the season.

The Texans are pretty short of playmakers when it comes to the other side of the ball. But wide receiver DeAndre Hopkins has made sure that he’ll be there to help his team. It doesn’t matter which of the Texans’ four quarterbacks threw the ball in the regular season, Hopkins was there to put on big games. He ranks third in the league with 1,521 yards and has 11 receiving touchdowns. Hopkins had 98 yards and two scores in the regular season matchup against the Chiefs.

Brian Hoyer seems to be the best quarterback to give the Texans a shot. He didn’t seem any worse for wear passing for 249 yards with a touchdown and an interception despite missing the past two weeks due to a concussion. He may need to be extra mobile in this game after left tackle Duane Brown was lost to injury in the regular season finale.

The Texans went 5-3 SU/ATS in their eight home games in the regular season.

The Texans (+3.5) end Kansas City’s hot stretch to advance to the Divisional Round. Create a betting account now and win big in the upcoming NFL Playoffs.