The final week of the NFL regular season is in the books, and the postseason picture is all set. Not every team was as fortunate as the Denver Broncos, New England Patriots, Carolina Panthers and Arizona Cardinals, who all earned first round byes in the playoffs.

Then again, who are we to complain as football fans for having some exhilarating matchups in the Wild Card round to make for some great viewing and betting action alike? Let’s take a quick glimpse at what lies in store for each of the first four games of the playoffs that will surely bring a lot of drama and excitement this coming weekend.

For an even closer look at each of those contests, check out our in-depth previews for Pittsburgh vs. Cincinnati, Kansas City vs. Houston, Seattle vs. Minnesota and Green Bay vs. Washington right after this.

[sc:NFL250 ]With the unlikely assistance from Rex Ryan and the Buffalo Bills, the Pittsburgh Steelers are back in the playoffs for the second consecutive season. The Steelers did their end of the deal by beating the hapless Cleveland Browns in Week 17, and saw the New York Jets lose and get denied of the final Wild Card spot at the hands of the Bills to clinch the sixth seed in the AFC.

Pittsburgh’s season did not go as planned, but they’re still in the postseason and that’s all that matters right now. The team lost their star running back in Le’Veon Bell on two separate occasions (an early season suspension shortly followed by a season-ending injury), and even had to power through without quarterback Ben Roethlisberger for several games as well.

But when Big Ben got it going in the second half of the season, the Steelers were hard to contain, especially with wideout Antonio Brown having a tremendous season of his own. Pittsburgh went 6-2 over its last eight games primarily because the Roethlisberger-Brown connection worked so well, with Brown having five games of over 100 yards receiving and a total of seven TDs during that second-half span. And with such a prolific aerial attack, the team finished in the league’s top five both in passing yards and points scored per contest this season. 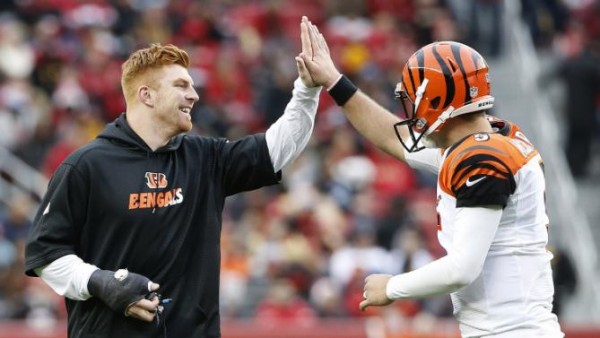 In Dalton’s place, backup A.J. McCarron played well enough to prevent his team from taking a nosedive in the standings. But with all things considered, the Bengals went just 2-2 with McCarron as their starter and ultimately lucked out on a first round bye in the playoffs.

And yet, the team has still performed rather well without Dalton in the lineup, mostly thanks to a solid running game and a defense that refuses to give up points. The Bengals D is second in the NFL by allowing just around 17 points per game, and the backfield duo of Jeremy Hill and Giovani Bernard knows how to find the end zone on the ground to cap off offensive drives (Cincinnati ranks in the top five of the league with 18 rushing TDs scored).

Then again, a date with the Steelers is the last thing that the Bengals want as they try to end their Wild Card round woes. Cincy made the playoffs each of the past four seasons, but they lost all four of their opening round matches as well. Getting over that playoff-win drought is as tall an order as it was back then, as Pittsburgh has won eight of the past 10 games (SU/ATS) against the Bengals in Paul Brown Stadium, turning home field advantage virtually to a non-factor in the process.

Furthermore, the last time that the Steelers and the Bengals met in the playoffs was back in the 2005-06 season, where Pittsburgh demolished Cincy, 31-17, in (you guessed it) the Wild Card round. It also happened to be the same season that the Steelers won a Super Bowl title.

Has there been a more surprising team in the NFL this season than the Kansas City Chiefs? Left for dead with a 1-5 record and a five-game losing streak by Week 6, Kansas City did the improbable by running the table with 10 straight victories and without stud running back Jamaal Charles all the more.

Without Charles, who was basically the entire Chiefs offense all by himself for the past couple of seasons, quarterback Alex Smith rightfully took over his team’s offense like an elite QB should. Although Smith’s numbers aren’t as eye-popping compared to the league’s best like Tom Brady and Drew Brees, he took great care of the ball to post an NFL-best plus-16 turnover margin in the last 10 weeks of the campaign, aided by a league-low five picks all season long.

However, it has truly been Kansas City’s D that has carried the team to the postseason. During the 10-game win streak, that unit has only allowed an average of less than 13 points per contest, and just 18 points per game throughout the entire season, right behind the Seahawks and Bengals for the best scoring defense in the league. The Chiefs secondary is also responsible for 21 regular season interceptions, the second-most after the Carolina Panthers. 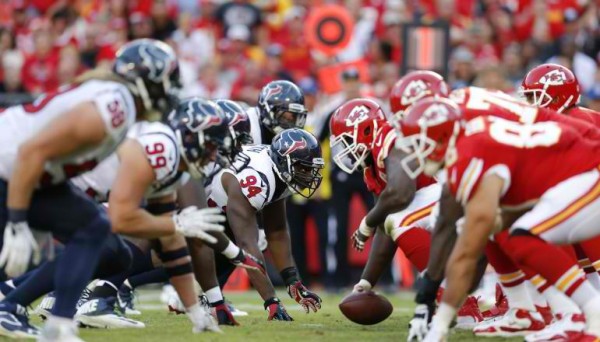 While we’re on the subject of terrific defenses, the Houston Texans’ own D cranked up its intensity at just the right time en route to the clinching the AFC South and making the playoffs for the first time since 2012.

Similar to the Chiefs, many pegged Houston’s season to be over after a 2-5 start. The team then went on to win four straight games followed by a two-game skid and a three-game run to cap off the regular season and finish at 9-7. The momentum from the three-game win streak at the tail end of the campaign will do wonders for the Texans’ playoff push, especially if their defense continues to shut down opposing offenses.

In those final three games – all against divisional opponents – Houston’s D allowed no more than 10 points per contest. Furthermore, there have been five games (all after the poor seven-week start) where the Texans defense had allowed just six points to their opposition, and they all resulted into wins.

However, the team’s offense is what’s holding the Texans back from being taken as a serious contender for the Lombardi Trophy. Without running back Arian Foster and an actual quarterback that can inspire confidence in the passing game, Houston remains a middling team via the pass and run alike. And although the Chiefs won their last meeting against the Texans from way back in the season opener, Kansas City appears to have a much more balanced roster and production on both sides of the ball as of the moment to outclass Houston’s mediocre offense.

Writer’s Prediction: The Chiefs’ wild season continues with a 24-16 win over the Texans.

Create a betting account now to start wagering with your winning predictions all throughout the NFL postseason.

Who would’ve thought that the loss of coveted tight end Jimmy Graham mid-season would end up being the spark that the Seattle Seahawks needed to blast their way onto the playoff picture?

Much like the Texans, the Seahawks were not living up to their offseason expectations by stumbling out of the gate with a 2-4 record in 2015. Things were seemingly bound to get worse when the aformentioned Graham suffered a season-ending injury, but that only made quarterback Russell Wilson all the more determined to get his team back into the postseason and beyond.

In fact, Wilson was so good in the second half of the season that he would go on to set franchise records for a single season with his 34 passing touchdowns, and also became the only player in team history to surpass the 4,000-yard passing mark.

We haven’t even began talking about the Seahawks’ defense. The “Legion of Boom” looks to be back to its dominant ways on D, having limited three of their last five opponents to seven points or less, including the 36-6 manhandling of the NFC West champions the Arizona Cardinals in the season finale on Sunday. In turn, the Seahawks finished the season with the NFL’s best scoring defense with just 17.3 points allowed per contest. 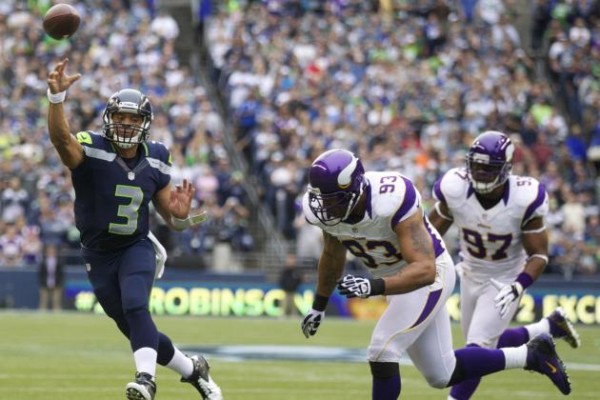 Seattle should still be cautious of their first round opponent in the playoffs in the Minnesota Vikings, who are fresh off an encouraging win over the Green Bay Packers in Lambeau to clinch their first NFC North title since 2009.

Similar to the Seahawks, the Vikes muscled through the regular season with a rather stout defense, particularly against the pass. The team ranks in the top 10 in passing yards allowed per game and total sacks for the season. A formidable pass rush and secondary will come a long way towards containing Seattle’s Wilson indeed.

However, Minnesota lacks the proper balance on offense to keep their opponents’ defenses guessing. Although the Vikes are fifth in the NFL with over 135 rushing yards per game, they also have the second-worst passing attack with less than 190 yards through the air per contest.

That’s not necessarily a knock on second-year quarterback Teddy Bridgewater, as he still commanded the offense rather efficiently with just 17 turnovers as a team all season long. Then again, playing safe football against a Seahawks team that’s firing on all cylinders could very much put an abrupt end to the Vikings’ spirited 2015 run. And let’s not forget that the Seahawks recently dealt a 38-7 drubbing of the Vikes in Week 13.

Writer’s Prediction: Seattle starts its bid for a third-straight Super Bowl appearance with a dominant 29-16 win over Minnesota.

Unlike their division rivals mentioned just a moment ago, the Green Bay Packers are uncharacteristically hobbling towards the Wild Card round with a two-game losing streak. Green Bay actually tallied three-straight victories before the aforementioned two-game slump. However, those wins were in large part due to the own ineptness of the Lions, Cowboys and Raiders. As for the final two losses? Those defeats were courtesy of two division winners in the Cardinals and the Vikings.

Clearly, something’s wrong with Aaron Rodgers and the Green Bay passing game. Rodgers has been picked off in five of his last six starts, and has not posted a triple-digit QB rating since mid-October.

At least the running game and the defense are getting the Packers by. Entering Sunday night’s clash with the Vikes, the team ranked 10th both in points allowed per game and rushing yards gained per contest. And come the moment that Rodgers regains his winning form right in the thick of the postseason, the rest of the field better watch out for the Cheeseheads and their signature playoff grit. 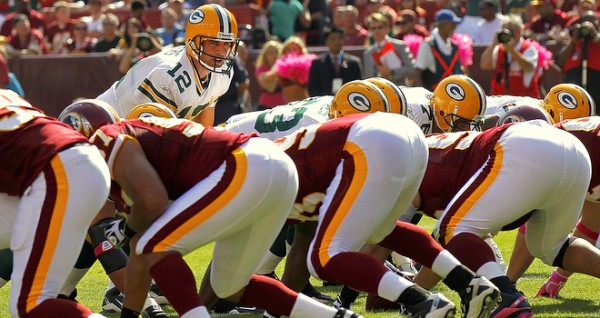 Then again, Green Bay will have the misfortune of going up against the sizzling Washington Redskins away from Lambeau Field in the first round.

It took quite some time for Washington to realize that its running game is going nowhere, and that quarterback Kirk Cousins can really get things done through the air. After throwing for just six touchdowns and eight interceptions through the first six games of the season, Cousins went on to throw 23 whopping TDs and just three picks over the next 10 games. He would also go on to finish with 4,166 passing yards, setting a new Redskins single-season record.

Having the Wild Card game against Green Bay take place at The Capital also does Cousins a huge favor. He has an 8-to-1 TD-to-INT ratio at home this season along with a passer rating of 117.0. As long as Mr. “You Like That?!” gets support from his O-line and prevents the Packers (43 total sacks this season) from getting to him this coming Sunday, there will surely be more meme-worthy off-field antics for us to sink into before Washington prepares for the even steeper uphill postseason battles ahead.

Writer’s Prediction: The Redskins continue to prove their doubters wrong with a 23-20 victory over the Packers.