The Seattle Seahawks remained in the hunt for Super Bowl 50 on Sunday, when they subdued the Arizona Cardinals in Glendale. With them back to the playoffs, the Seahawks target a big road win against the upstart Minnesota Vikings this coming Sunday. Will the Seahawks announce their entry into the playoffs by crushing Minnesota? Or will the Vikings send Seattle packing for vacation?

Read more about this matchup below. You can also check out our breakdown of Steelers vs. Bengals.

[sc:NFL250 ]After snapping Arizona’s nine-game win streak on Sunday with an emphatic 36-6 road win, the Seahawks have made their message clear—that they’re ready for another Super Bowl run.

The Seahawks’ passing attack was efficient in the desert, with Russell Wilson passing for 197 yards and three touchdowns without an interception on 19 of 28 completions. The backfield was productive too with Christine Michael rushing for 102 of the team’s 145 total rushing yards.

Jimmy Graham’s top replacement, Cooper Helfet, has been a reliable option for Wilson. The undrafted tight end out of Duke has seen his role increase over the last two games, catching eight passes for 85 yards. He hasn’t found the end zone yet, but that may come against Minnesota’s defense that ranked 28th against tight end receivers per DVOA through Week 16.

But more than Helfet’s upside, it’s Marshawn Lynch’s potential return that has the Seahawks pumped up. Lynch hasn’t played since November 15 because of abdomen injury, but head coach Pete Carroll is optimistic of the running back’s chances of playing in the wild card game. With Lynch back in the fold, the Seahawks will look to go beast mode on the ground against Minnesota’s, middling run defense. Seattle runs the ball for 141.5 yards per game, third best in the NFL.

Minnesota is set to face anew the Seahawks nightmarish defense that stalled the Vikings in the first meeting. The Seahawks allowed just 125 total yards to Minnesota’s offense in that game, a 38-7 win in TCF Bank Stadium on November 13.

Create a betting account now and cash in on all the NFL postseason action. 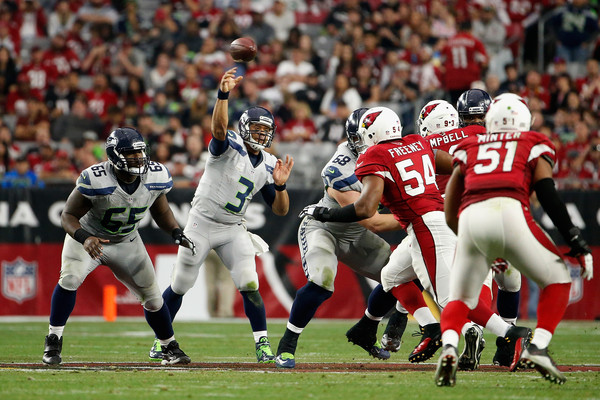 As “reward” for winning their showdown on Sunday against Green Bay, 20-13, the Vikings get a postseason date with Seattle. While a matchup with the a team that beat them 38-7 in Week 13 doesn’t sound like a prize for the newly crowned NFC North champs, the Vikings will at least have home field advantage in this one. The Vikings are 6-2 ATS at home in the regular season.

Minnesota’s passing offense didn’t look good in the win over the Packers with Teddy Bridgewater passing for only 99 yards with an interception on 10 of 19 attempts. That has been the story so far for the Vikings this season though, as they often let their backfield to create the plays that get them to first downs. The Vikings, who racked up 151 rushing yards on Sunday, are fourth in the league in rushing yards per game and last overall in passing.

With Adrian Peterson still looking fresh at age 30, the Vikings are expected to try to drill through Seattle’s stout run defense regardless of how poor their ground attack looked in the first meeting with the Seahawks, wherein they mustered just 31 rushing yards. Peterson finished the regular season tops in the league with 1,485 rushing yards.

But even if the Vikings have two Adrian Petersons, they still need Bridgewater and company to step their play a notch just to give their backfield some more breathing room. Of course, that means Minnesota’s offensive line have to show up. The Vikings’ pass protection has been problematic in regular season, allowing 45 quarterback takedowns, which includes the three sacks it surrendered against the Packers in Week 17.