Life after Jameis Winston isn’t that bad for the Florida Seminoles. With Everett Golson at the helm of their offense, the Seminoles were able to blast the Texas State Bobcats to open up their season. With a first win in the books, the Seminoles look to make in two in a row, when they welcome the South Florida Bulls to Tallahassee on Saturday.

For more college football, click here for a preview of the match between Jacksonville State and Auburn.

Betting on the South Florida Bulls

[sc:NCAA240banner ]It’s no secret that South Florida’s head coach Willie Taggart is on the hot seat following a 2-10 2014 season by the Bulls. Consider that seat a little less warm, though, after the Bulls blew the Florida A&M Rattlers to bits last Saturday, 51-3.

Taggart should feel even more secure about his job if he can steer the Bulls to a huge win over Florida State on the road come Week 2. The Bulls are 7-3 ATS in their last games away from home.

Against the Rattlers, South Florida leaned on a balanced offense that churned out 281 passing yards and 275 rushing yards. Starting quarterback Quinton Flowers passed for 141 yards and two touchdowns, while backup Steven Bench threw for 140 yards to go along with a touchdown. Wide receiver Elkanah Dillon had a field day hauling down passes as he finished with 126 receiving yards with a touchdown. Four different Bulls, meanwhile, had a rushing score versus hapless Florida A&M.

Obviously, it’s foolish to expect South Florida to enjoy the same success on offense against Florida State. With that said, the Bulls’ defense will have to do a heroic job in order for South Florida to get as much possessions on offense. The Bulls defense will be led by Nigel Harris, who led the FBS in forced fumbles per game in 2014 with an average of 0.45. The Bulls also has three returning starters in their secondary, which should help the team limit Florida State’s passing attack.

Create a betting account now and cash in on all the NCAA regular season action. 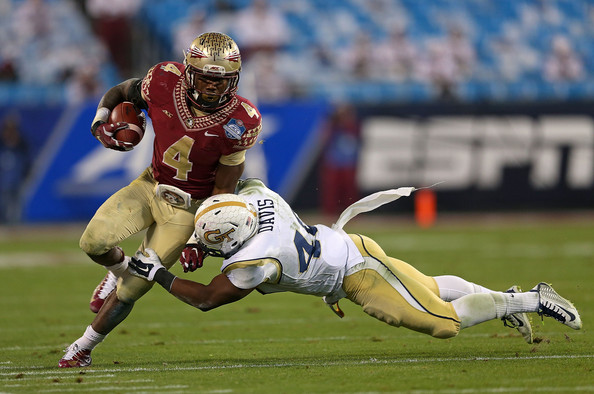 Florida weather is just mighty fine for Everett Golson. The former Notre Dame signal-caller had a stellar performance in his debut for the Seminoles, as he passed for 302 yards and four touchdowns, albeit against weak opposition, in Florida State’s rousing 59-16 win over the Texas State Bobcats at home last Saturday. Golson looks to extend his hot start when the ‘Noles host South Florida next Saturday.

Golson’s brilliance in the Texas State game, however, shouldn’t overshadow the ‘Noles’ equally effective rushing game. Led by Dalvin Cook, the Seminoles were able to put up 266 rushing yards. Cook had 156 rushing yards and two touchdowns, while Mario Pender rushed for 92 yards and reached the end zone once. That smells trouble for South Florida that is just a season removed from allowing opponents rush for 182.92 yards per game, fourth worst in the 12-team AAC in 2014.

Florida State is undefeated at home since 2013, and has an 18-game win streak in Tallahassee.