The St. Louis Blues have beaten the Nashville Predators three times this season. Doing that again later tonight, however, will not be an easy task for St. Louis, as the Preds are starting to play like a title contender. Will the Blues continue their mastery of Nashville? Or will the Preds pummel St. Louis at home?

Read on for a breakdown of this matchup. You can also check out our preview of Panthers vs. Caps.

With their offense going anemic, the Blues dropped their last two games before plunging into the All-Star break. The Blues lost in back-to-back fashion to Colorado (2-1 SO) and to Chicago (2-0). As evidenced by the score, the Blues’ offense has gone south after recording 11 goals in the three previous games, which includes an impressive 5-2 victory against Pittsburgh on January 18.

Scoring, however, has never been a problem for the Blues against Nashville this season, as they’ve outscored the Preds 10-4 in three meetings thus far. The most recent matchup ended with the Blues on top, 4-3, on December 29.

Defensively, the Blues are looking to shut Nashville’s power play attack down anew. St. Louis has allowed the Preds to score just one goal on 10 power play opportunities, thanks to its effective penalty kill that posts an 85.2 percent success rate on the season.

Alexander Steen and Alex Pietrangelo have played the best offensively against the Preds. Steen has two goals and two assists against Nashville this season, while Pietrangelo has a goal and three assists.

Jake Allen, meanwhile, enters tonight’s contest boasting a 3-0 record and a 1.31 GAA and .962 SV% in those three matchups with Nashville. 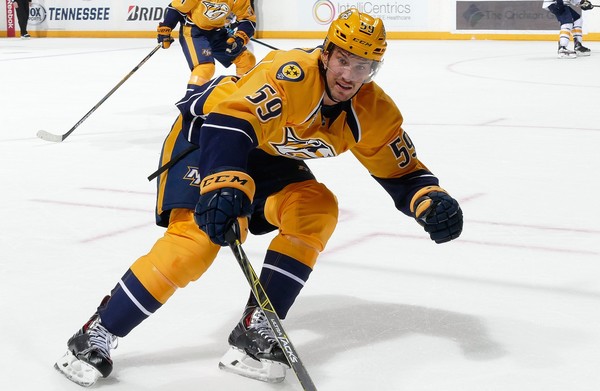 Sure, the Blues have beaten Nashville three times already this season, but now maybe the wrong time for St. Louis to hook up with the Preds. For one, Nashville is playing its best hockey in a while, winning all of its last four games.

In their most recent outing, the Preds subdued Calgary, 2-1, on January 27. That’s also the fourth-straight time the Preds have limited their opponents down to just a goal.

That’s a marked improvement for Nashville’s defense that has disappointed for the most part of the season by allowing 2.5 goals per game. But with Pekka Rinne and Carter Hutton finally getting it all together in between the pipes and the team’s imposing blueline getting to work, the Preds are in line to frustrate St. Louis’ offense later tonight. Nashville opponents take 26.7 shots for per game, the second fewest in the league.

Speaking of the blue line, a couple of defensemen lead the Preds in points with Roman Josi having 35 and Shea Weber posting 31. The team’s leading scorer in James Neal, however, needs to make his presence felt after going scoreless in the past three games against St. Louis.