Every Thanksgiving, Americans take the day to enjoy some festivities and a great meal or two, while also getting a bonus serving of NFL action. This year, the league has an extra serving of deliciousness for fans: all three of the Thanksgiving games are great, watchable matchups. Not just good, great.

Gone are the days when the Cowboys or Lions would ruin a game by being terrible. This could go down as one of the best Thanksgiving slates of all time, with two premium divisional contests that will go a long way to deciding the eventual winner, and another that at the very least should involve some vintage sad Jay Cutler.

Read on for a quick viewing guide for Thursday’s action, or for more detailed looks at the games check our previews for Bears vs. Lions, Eagles vs. Cowboys, and Seahawks vs. 49ers.

The day begins with a warm up tilt that should be plenty watchable. The Lions have lost two-straight to lose hold of the lead in the NFC North but their schedule softens up noticeably for the next month. After tough losses to the Cardinals and Patriots that saw Detroit score just 15 points combined, the Lions now have four-straight games against teams with losing records, including two against these Bears.

[sc:NFL240banner ]The best part of this game may be watching the Detroit passing game find its feet (and hands) against the Bears weak secondary. Chicago has allowed the fourth-most yards per game in the air, and should give Golden Tate and Calvin Johnson enough room to help Matthew Stafford back to his old self. Detroit hasn’t had a touchdown in two weeks and this game against Chicago could be just the boost they need.

Writer’s Prediction: The Bears do enough to limit a Stafford-ian resurgence and the teams grind out a tight one that stays under 47.5.

The Cowboys and Eagles have been steadily picking up wins all season long and now both sit at 8-3. In what should be one of the better games of the season–not just this Thursday–fans can look forward to two of the more prolific offenses and some of the most exciting offensive players in the league.

The key to this game may the play of a man who is no stranger to prime time attention. Mark Sanchez will once against start for the Eagles, with Nick Foles injured. Sanchez has been moving the chains for the Eagles (he’s cleared 300 yards passing in all three of his starts), but comes with a pretty ugly propensity for turnovers, having thrown six picks against seven touchdowns this year. If Sanchez can safely get the ball to his playmakers, including upstart wideout Jordan Matthews, the Eagles may be able to take control of this division in Dallas.

Writer’s prediction: The ‘Boys get to Sanchez en route to their biggest win of the season, while covering -3. 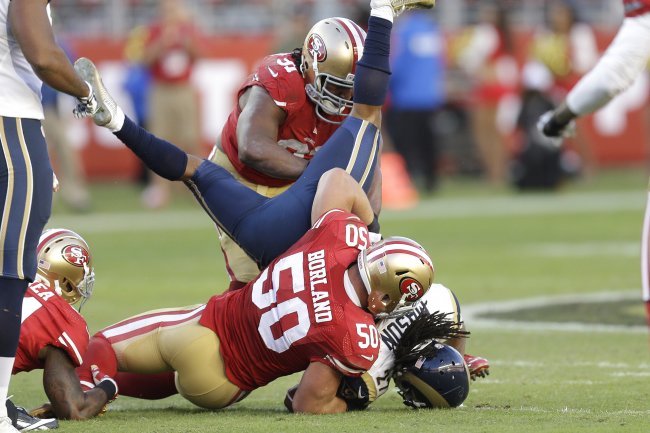 Normality is beginning to return to the NFC West. The Seahawks put the Cardinals in their place in Week 12, and now travel to San Francisco for another critical divisional showdown, this time against the 49ers, who kept pace with Seattle last Sunday with their third-straight win. Even if neither team catches the Cardinals for the division title this year, the winner of this game will be well-positioned to grab one of the two NFC wild card spots in 2014.

Defensive Rookie of the Year candidate Chris Borland may figure largely in this Thanksgiving night matchup. The linebacker has been a monster stopping the run this season, and will need to be at his best to try and stop Russell Wilson, Marshawn Lynch, and the Seahawks’ top-rated run game. If Borland and his defensive colleagues can disrupt the Seahawks, Colin Kaepernick has shown in recent weeks that he can get enough done to put points on the board for San Francisco.

Writer’s Prediction: The 49ers shut down the Seahawks on the inside and win a tight one.

No matter who you like this Thursday, don’t forget to create a betting account and cash in on the action for a little extra gravy to go with your NFL action. Happy Thanksgiving, everyone!