This time last year, Auburn’s season was done. Days after the Tigers’ humiliating 49-0 loss to Alabama in the Iron Bowl, 2010’s national championship-winning head coach Gene Chizik was fired as Auburn finished 3-9 and an appalling 0-8 in the SEC. [sc:NCAA240banner ]

Fast-forward 12 months and first-year head coach Gus Malzahn has revived a languishing program with an impressive 12-1 record (7-1 in the conference). An unforgettable win in this season’s Iron Bowl against #1 Alabama has sent the Tigers preparing for their second trip to the national title game in four years to cap off a truly remarkable turnaround.

You can view the preview of the upcoming BCS National Championship Game between Florida State and Alabama right here.

Unlike its basketball counterpart, college football doesn’t really lend itself to many so-called “Cinderella stories.” But as Auburn has proven this year, there are those special teams/individuals that capture the romance and the underdog nature of amateur collegiate sports. 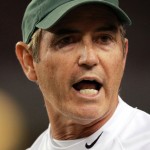 In 2008, Art Briles inherited a Baylor program in the same state as Gus Malzahn at Auburn: a 3-9 team that went winless in conference play. Briles didn’t magically send the Bears shooting up the standings like Malzahn, but he finally did it in this, his sixth season. Baylor went 11-1 as they won the Big 12 conference for the very first time in 17 years. 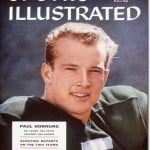 Like 1969 NBA Finals MVP Jerry West, Notre Dame great Paul Hornung has the dubious distinction of being the only Heisman winner from a losing team, which should tell you all you need to know about his 1956 season. Hornung was said to have played as many as six positions – quarterback, tailback, safety, punter, kicker and wide receiver – as he and his Irish toiled to a disappointing 2-8 season. 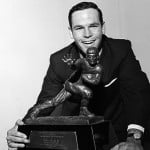 Notre Dame quarterback John Huarte hardly saw the field during his sophomore and junior years at South Bend – and freshmen didn’t play back in his time. But he was given his chance to shine in his senior year, which he grabbed with both hands and never let go. Huarte led Notre Dame to a 9-1 record as he took home the 1964 Heisman Trophy. 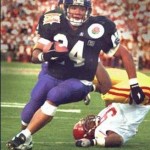 The Big Ten from the 70’s to the 90’s was a Michigan-Ohio State duopoly, while lowly Northwestern wallowed at the bottom. But in 1995 – after eight straight seasons of three wins or less – the Wildcats improbably climbed to the very top. They went 10-1 – defeating powerhouses Notre Dame, Michigan and Penn State in the process – to earn their second ever trip to the Rose Bowl, which they lost to USC. 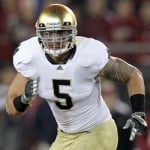 Notre Dame came into the 2012 season unranked in the AP Top 25 poll, but a tremendous defense – led by Heisman Trophy candidate Manti Te’o – powered the Irish to a perfect 13-0 season and a trip to the National Championship Game. However, the luck of the Irish abruptly ran out as Alabama handily won its second straight national title. 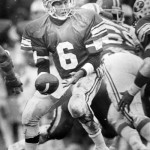 Unlike Notre Dame, BYU went all the way from unranked in the preseason to national champions – the last team to achieve the feat. There are obvious caveats attached to the Cougars’ championship – their relatively easy schedule and the lack of a BCS or playoff chief among them – but their title as the only mid-major national champion in history cannot be taken away from them. 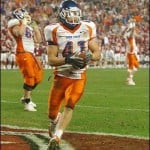 Another mid-major success story is Boise State. Similarly unranked in the preseason, the Broncos charged up the rankings under first-year head coach Chris Peterson. They would finish an undefeated 13-0, but were only slated to play in the Fiesta Bowl against Oklahoma. That game against the Sooners turned out to be one of the greatest bowl games ever played, as Boise State prevailed 43-42 in overtime. 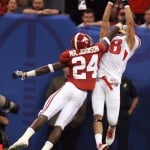 Nick Saban’s Alabama has only lost once in six bowl appearances; that one defeat came at the hands of Utah in the 2009 Sugar Bowl. The undefeated Utes had no legitimate NFL prospects, but that didn’t stop them from thoroughly dominating an Alabama team that would win the national championship the next year. Utah had a commanding 21-0 lead by the first quarter en route to a 31-17 win. 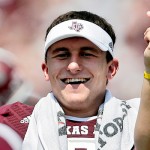 People see Johnny Football – first freshman Heisman winner ever and biggest star in college football – and instantly assume he was a sought-after five-star recruit. But that was hardly a case. Manziel, you must remember, was just a three-star recruit, and he wasn’t even courted by some schools to play quarterback. But against the odds, he won the starting job at Texas A&M and the rest, as they say, is history. 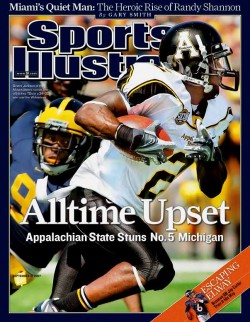 It’s the granddaddy of all upsets: Appalachian State, 34-32 over mighty Michigan. The Mountaineers were 27-point underdogs in Ann Arbor to a ranked Wolverines squad with future NFL starters Chad Henne and Jake Long. But a blocked last-gasp Michigan field goal sealed Appalachian State’s place in history as the first (and currently only) D1-AA school to upend a Top-25 ranked opponent.

Have any great underdog stories to share with us? Think we left any essentials off the list? Get at us on Facebook, Twitter and Google Plus and tell us what you think. Also, don’t forget to place your bets on all the Bowl Season action coming up in 2013 and 2014.