The Washington Capitals have been notorious for choking in the playoffs. If they want to avoid that label, they will have to dig deep an find a way to overcome the Pittsburgh Penguins, who are now enjoying a the driver seat in this Eastern Conference semis matchup. Will the Caps tie the series up? Or will the Penguins move one win away from advancing to the conference final? Read on for more about this game. You can also check out our breakdown of the MLB game between the Yankees and the Orioles.

For the first time in these playoffs, the Caps’ backs are against the wall. After a 3-2 loss to Pittsburgh on Monday, Washington finds itself trailing in the series, 2-1. The Caps, however, could take back the momentum with a win later tonight.

The Caps were held scoreless for the first two periods of Game 3. That’s despite outshooting Pittsburgh by a wide margin of 49-23. The Caps did have an easy time getting past through Pittsburgh’s blueline but just couldn’t solve Matt Murray. The Caps also went medieval on Pittsburgh, unleashing 58 hits as against 25 by the Penguins. The number of shots and the amount of physicality dished out by the Caps are encouraging signs for Washington moving forward. That being said, the Caps have yet to see their offense and Braden Holtby click at the same time. While it was nice for the Capitals to see Justin Williams score in Game 3, they remain thirsty for production from the Evgeny Kuznetsov. Through eight postseason games, Kuznetsov only has two points (a goal and an assist).

Holtby allowed all of the Pens’ three goals in Game 3, the second time in this series that he’s surrendered as many. It’s not time yet for the Caps to sit Holtby, but the Vezina Trophy candidate has to play like one this Wednesday.  Washington is 6-4 in its Holtby’s last 10 road starts. 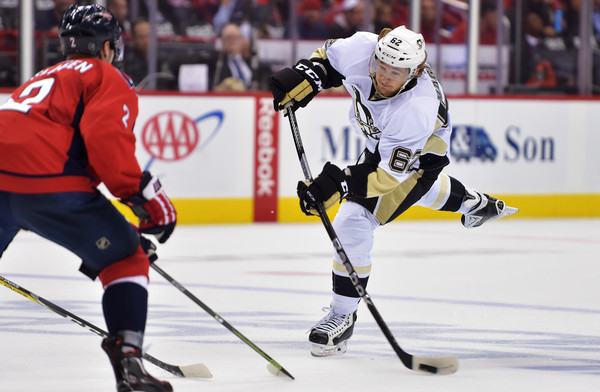 With the way Matt Murray played in Game 3, Marc-Andre Fleury may have to get used to being the backup goalie. Murray was downright sensational on Monday, making 47 stops, including 28 in the first two periods.

The Penguins made the most of their relatively few scoring chances. Patric Hornqvist opened up the scoring with an even-strength goal in the first period while Tom Kuhnhackl and Carl Hagelin buried the next two, respectively. These secondary offensive pieces have been outplaying their Washington counterparts. In particular, the second line of Hagelin, Nick Bonino, and Phil Kessel has combined for three goals and seven assists thus far this series.

While this opportunistic and counter-punching approach of the Pens has paid off in the last two games, they still need a strong performance from Murray to make this work.

Murray gobbled up shot after shot in Game 3 by the determined and eventually desperate Washington side, which had a hard time connecting.

Holtby’s the more celebrated goalie between him and Murray, but it’s the latter who’s showing postseason poise. After a forgettable Game 1 performance in which he allowed four goals, Murray bounced back strong by making 70 stops on 73 shots in the next two games.