There’s bound to be a shootout in this one, so stay tuned and get to know everything there is to this awesome matchup. Gearing up for big winnings this bowl season? Check out our complete previews for the Royal Purple Las Vegas Bowl and the Gildan New Mexico Bowl.

Betting on the Western Kentucky Hilltoppers (11-2)

The Western Kentucky Hilltoppers won their final five games, including a 45-28 blowout of Southern Mississippi for the Conference USA Championship. The championship was possible through the stellar play of quarterback Brandon Doughty, who threw for 410 yards and three touchdowns in the win. Doughty has been on a tear recently, passing for 18 touchdowns in the Hilltoppers last five games.

[sc:NCAA240banner ]Doughty is one of the best quarterbacks in the nation, leading the nation in touchdown passes for a second straight year. He’s also a two-time C-USA MVP. Doughty will be hard-pressed for another solid performance, especially in a homecoming of sorts hailing from Miami’s Davie suburb. He’ll have a very solid weapon to unleash his strong arm in wide receiver Taywan Taylor.

Taylor has 79 catches for 1,363 yards and 17 touchdowns this season. He and Doughty lead one of the nation’s most prolific offenses with 44.2 yards per game (fourth). The Hilltoppers rank third in the FBS in passing yards with 365.4 per game. But getting to the end zone may be difficult for this game. South Florida has allowed only 13 touchdowns this season, while intercepting 15 passes.

Western Kentucky may also have a solid outing on the other side of the ball. The Hilltoppers are tied for second in the nation in forcing turnovers (31). They have a trio in defense, which has multiple interceptions this season. Defensive backs Prince Charles Iworah and Wonderful Terry have four and two picks respectively, while linebacker Nick Holt has three. The Hilltoppers have also recovered 14 fumbles.

The Hilltoppers went 4-1 ATS in their five-game win streak.

Betting on the South Florida Bulls (8-4) 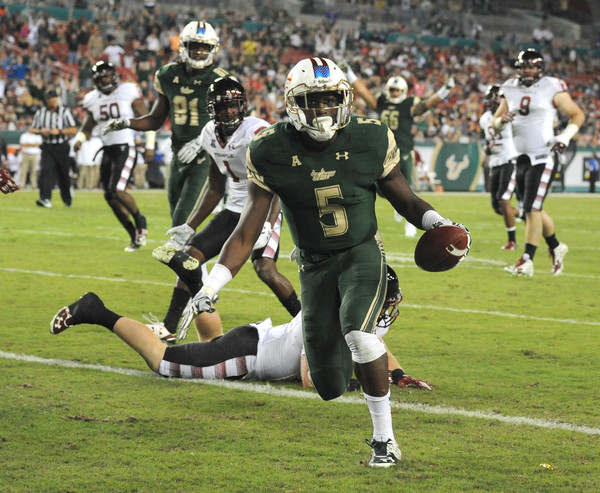 While Western Kentucky loves to air out the ball, the South Florida Bulls have an entirely different approach. The Bulls love to grind it out on the ground with one of the FBS’ strongest running games. South Florida ranks 11th in the nation with 243.4 yards rushing per game.

Running the ball helped the Bulls win their regular season finale against UCF. They churned out 281 yards on the ground on 54 carries, while controlling time of possession throughout the game. The same approach could prove useful to limit Western Kentucky quarterback Brandon Doughty’s time on the field.

Running back Marlon Mack has been South Florida’s go-to guy from the backfield. He leads the team with 1,273 yards on 193 carries. He has found the end zone eight times. Quarterback Quinton Flowers has also showed quick and strong legs, ranking second in the team with 883 yards rushing and 10 scores.

While the Bulls have a reputation of running the ball, they’ve been very efficient with their passing specifically in the red zone. Flowers has six touchdowns from 20 yards or less in the Bulls’ four-game win streak to end the season.

South Florida also has some playmakers on the other side of the ball. Defensive lineman Bruce Hector and defensive back Jamie Byrd each lead the team with five sacks this season. Defensive back Deatrick Nichols has a team-high four interceptions. A sound defense has the Bulls ranking 28th in the nation, allowing opponents just five yards per play.

A strong defense and a clock-eating running game should help keep the Bulls competitive in this bowl game.

The Bulls are 4-0 SU/ATS in their last four games.