The 2015 Famous Idaho Potato Bowl is just the second bowl appearance in the history of Akron football. You can expect them to be all pumped up in this game against the Utah State Aggies. Akron ended its regular season on a four-game win streak, punctuated with a 20-0 lashing of Kent State as the finale. Utah State will have welcomed the long rest before bow season, ending the season on a horrible 2-4 run.

Can Utah State get over their hurdle? Or will Akron continue its win streak? Read on as we take a look at this sizzling matchup. For more bowl games, check out our complete previews for the R+L Carriers New Orleans Bowl as well as the Raycom Media Camellia Bowl.

It’s going to be all defense for the Akron Zips. The run defense has been a killer. The pass defense has also been strong as the Akron defense starts seven seniors. The Zips’ defense doesn’t make plenty of mistakes, starting with their front seven. The defensive line has held up all season long limiting opponents to 89.8 yards rushing per game, third in the nation.

[sc:NCAA240banner ]Leading Akron’s solid defense is senior linebacker Jatavis Brown. He is the MAC Defensive Player of the Year, leading the team with 108 tackles, 10.5 sacks and 17.5 tackles for loss. Brown had three multi-sack games this season. He also has forced three fumbles. Having a disruptive linebacker like Brown should help the Zips stop Utah State’s dangerous spread attack. Cornerback DeAndre Scott gives him support from the secondary with a team-high six interceptions.

A solid defense should help keep Utah State’s offense off the field. Akron’s reliance on the rushing offense should make sure that they milk the clock as much as possible. Running back Conor Hundley leads the Zips’ rushing attack with 883 yards and 10 scores.

Quarterback Thomas Woodson is better with his legs than he is with his arm. Woodson has completed 53.2 percent of his passes for 2,034 yards and 16 touchdowns with 10 interceptions. But he’s been excellent at scrambling with 544 yards rushing and three scores. But the Zips may struggle against Utah State’s solid rushing defense, allowing just 3.9 yards per carry (29th in the nation).

The Zips are 5-2 ATS in their last seven games.

Betting on the Utah State Aggies (6-6) 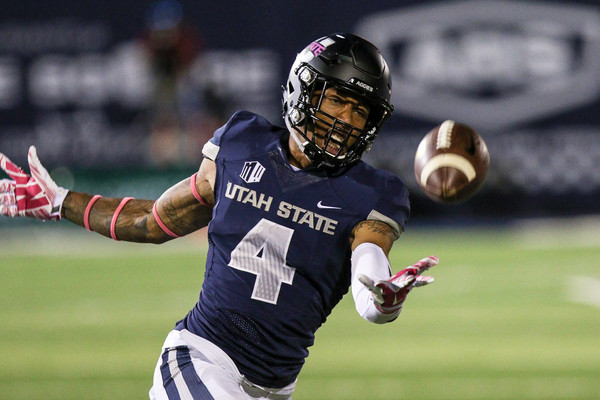 The Idaho Potato Bowl has been a familiar sight for the Utah State Aggies. This will be their fourth time playing in the Potato Bowl, but face uncertainty at quarterback. The Aggies recently got senior quarterback Chuckie Keeton back from a knee injury. But he didn’t play too well playing in the last two games of the season, completing 47.2 percent of his passes for 352 yards with a touchdown and an interception.

Keeton has three touchdowns this season compared to six interceptions. With the senior signal-caller struggling, the Aggies may turn more to sophomore Kent Myers, who threw for 823 yards with eight touchdowns and just one interception in three games before giving way to Keeton. The Aggies may have their two quarterbacks sharing snaps, but that could only cause some discord in the offense.

No matter which quarterback lines up under center, he’ll be targeting senior wide receiver Hunter Sharp. Despite being suspended for the first two games of the season, Sharp still managed to lead the team with 746 yards receiving. He shares a Mountain West-high eight touchdown receptions.

Having a player like Sharp should help Utah State exploit a Zips defense which allows 238.8 yards passing per game (88th in the nation). But drawing a matchup with Akron cornerback DeAndre Scott could hinder his production.

The Aggies are not short on defensive playmakers as well. They’re ranked 14th in the FBS in passing defense, limiting opponents to just 180.4 yards per game. Linebackers Kyler Fackrell and junior Nick Vigil anchor their defense. Fackrell has five fumble recoveries and 13.5 tackles for loss to be included in the first-team all-Mountain West, while Vigil has 140 tackles with 12.5 for loss.

The Aggies have won all three of their bowl games since 2012.

The Zips (+7) get the upset. Create a betting account now and win big this bowl season.