It’s time for some SEC flavor as the No. 10 Alabama Crimson Tide go on the road against the No. 9 Texas A&M Aggies. The Tide have been solid after losing to Ole Miss in Week 3 of the college football season, winning three straight games all by double digits. But they could have some trouble against undefeated Texas A&M.

Read on as we break down this thrilling SEC showdown. Get the best of this week’s college football games with our complete previews for USC vs. No. 14 Notre Dame and No. 7 Michigan State vs. No. 12 Michigan.

Betting on the Alabama Crimson Tide (5-1)

Alabama played some solid defense to keep them in the game in the first half of their Week 6 matchups against the Arkansas Razorbacks. Then the Tide’s offense went to work in the final 17 minutes of the game to score 24 points for the 27-14 victory.

[sc:NCAA240banner ]The Tide’s offense was having trouble heating up, managing just a field goal in the first half. But linebacker Reggie Ragland had a very solid performance to keep the Tide in the game. Ragland had a sack, two quarterback hurries, a forced fumble and eight total tackles. Linebackers Rashaan Evans and Tim Williams added a sack each, while defensive back Eddie Jackson had an interception.

Alabama’s defense should be able to force a couple of crucial turnovers against Texas A&M, which has six total giveaways through its first five games this season.

Quarterback Jake Coker was intercepted twice in the first half, but managed to rally late. He ended the game 22 of 33 for 262 yards with two touchdowns. He could struggle once again facing Texas A&M’s solid pass defense, which allows just 192.2 yards per game through the air.

But the Tide should be solid if running back Derrick Henry could go off for big gains on the ground. Henry ran for 95 yards on 27 carries. He set an Alabama record with a touchdown in 11 consecutive games. If there’s a way to be Texas A&M, it’ll be on the ground. The Aggies are allowing 182.6 yards rushing per game this season. They’ve allowed the third-most rushing touchdowns in the SEC (eight).

The Tide has won four straight on the road, but has gone just 1-3-1 ATS in those games. 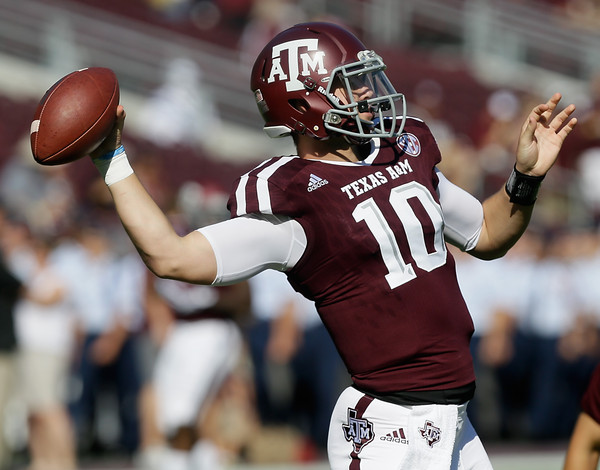 The Texas A&M Aggies had a bye in Week 6, but their previous game was a tale of two halves much like Alabama’s. Quarterback Kyle Allen and the Aggies offense roared for an explosive first half, but let the defense do the rest in the second.

Allen threw for two touchdowns in the first quarter, a one-yarder to Ricky Seals-Jones and a 29-yarder to Damion Ratley. Running back Tra Carson punched in a one-yarder in the second to give the Aggies a 24-10 halftime lead.

The Aggies didn’t stall too much in the second half; they just had trouble finding the end zone, settling for two field goals. Allen finished the game 25 of 41 for 322 yards. Carson had 110 yards on 26 carries. The Aggies’ impressive receiving corps continued to make big plays. Christian Kirk, Texas A&M’s leading receiver with 519 yards, caught eight passes for 77 yards against Mississippi State. Josh Reynolds caught seven passes for 141 yards.

It’s going to be interesting how Texas A&M’s aerial offense matches up with Alabama’s excellent defense, which has allowed just 187.2 yards passing per game this season. The Tide have eight total interceptions this season, so Allen will need to be extra sharp with his passes.

On the other side of the ball, Texas A&M has one of the best pass rushes in the SEC. They totalled 19 sacks through the first five games of the regular season. Defensive lineman Myles Garrett leads the way with 7.5 sacks, while Daeshon Hall is a step behind with five. They’ll have a challenge ahead of them in Alabama’s offensive line, which has allowed just seven sacks this season.

Better quarterback play leads Texas A&M to a big win over Alabama. Create a betting account now and enjoy the best odds and lines for every college football game this season.