Baltimore was one play away from a big season-opening win over the Denver Broncos, but a late interception had them taking a loss. The Ravens now continue on the road when they take on the Oakland Raiders in Week 2. The Raiders were unspectacular in another season-opening loss. An injury to quarterback Derek Carr further compounded their problems.

It’s all gridiron action from here on out. Check out the complete previews for the Chargers vs. Bengals and Patriots vs. Bills for plenty more football action.

The Ravens’ defense was very much alive in Week 1 of the regular season. They limited Denver’s incredible quarterback, Peyton Manning, to 24 of 40 for 175 yards and a lowly 59.9 passer rating. Cornerback Jimmy Smith also had a 24-yard pick-six, Baltimore’s only touchdown of the game.

[sc:NFL240banner ]With the way Baltimore’s defense made Manning look human, they’ll be licking their chops at the prospect of facing Oakland’s second-year quarterback Derek Carr. The Ravens have a devastating pass rush that could cause Oakland’s young signal caller into mistakes. Baltimore sacked Manning four times in Week 1. Second-year linebacker C.J. Mosley led the way with two sacks, just one short of his tally last year.

The Ravens’ offense could do much better than their Week 1 performance if they can exploit Oakland’s defense, which allowed 396 total yards in a 20-point loss to Cincinnati. Quarterback Joe Flacco was misfiring all day long going 18 for 32 for 117 yards and two interceptions against the Broncos. No. 1 running back Justin Forsett only managed a paltry 43 yards on 14 carries. Meanwhile, No. 1 wide receiver Steve Smith Sr. caught two of seven targets for 13 yards.

While Smith should get the lion’s share of targets against Oakland, tight ends Crockett Gillmore or rookie Maxx Williams could have big days against the Raiders’ secondary which allowed 104 yards and two touchdowns to Cincinnati tight end Tyler Eifert in Week 1.Gillmore and Williams had some long receptions against Denver; Gillmore caught a 14-yarder, while Williams had a catch for 15 yards. They also have the size to give Flacco a couple of live red zone targets.

The Ravens are 4-2 against the spread in their last six games on the road. 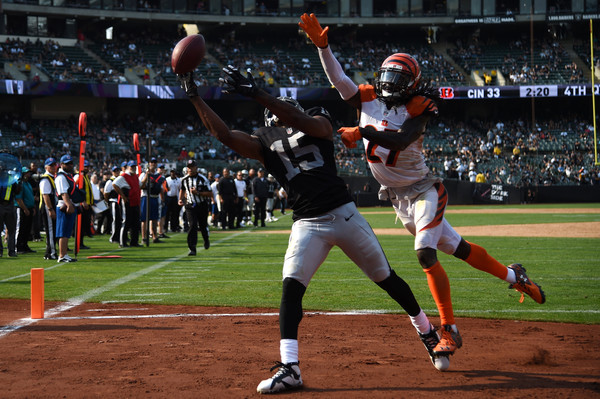 That was a dud. Plenty of noise was coming out of Oakland with second-year quarterback Derek Carr finally having some pieces to work with. He had Michael Crabtree, nabbed in free agency from San Francisco, and a collegiate star in Amari Cooper from Alabama.

Things didn’t work out the way the Raiders hoped; Carr left the season opener with a hand injury in the second quarter, while Crabtree and Cooper combined to catch 10 of 17 passes for 84 yards and no touchdowns. Oakland’s passing game may continue to struggle, especially going against Baltimore’s excellent defense.

Oakland’s defense wasn’t of much help either. The Raiders managed just one QB Hit and no sacks against Cincinnati. Bengals quarterback Andy Dalton completed 25 of 34 passes for 269 yards and two touchdowns. If the Raiders consistently fail to put some form of pressure against the Ravens, then there will be little stopping Flacco from showing off his cannon of an arm.

It’ll be up do defensive ends Justin Tuck and Khalil Mack to get the Raiders’ pass rush going. Both of them had spectacular late season runs in 2014; each of them racked up three sacks in the last four games in 2014. Getting past Baltimore’s tough offensive line will be a challenge though. The Ravens allowed the second-least sacks (19) in 2014.

The total has gone over in four of the Raiders’ last five home games.

It’ll take some time before the Raiders can get their bearings. Baltimore rebounds with a nice blowout on the road. Create a betting account now and win big on the new NFL season.