Big 12 college football couldn’t be any bigger this week as Baylor brings its potent offense to Stillwater to face Oklahoma State on Saturday. A lot is on the line in this game: A win for Baylor could possibly spell a BCS title appearance, while for the Cowboys, this is their best chance to position themselves for a Big 12 championship game.

Betting on the Baylor Bears:

Texas Tech engaged the Bears in a shootout early in the game and found out quickly that their firepower could only last for so long against the No. 1 scoring team in the FBS. The Red Raiders lead by as much as 13 points in the first quarter (20-7), but once the Bears pulled their guns out of their holsters, there was no looking back for Baylor. [sc:NCAA240banner ]

Bryce Petty finished with another top-notch performance, putting him in the thick of discussions for the Heisman Trophy. Petty threw for 335 yards and three touchdowns and added two more rushing TDs in Baylor’s complete destruction of the Red Raiders’ defense.

The 63-point total of the Bears in that game was the sixth time they scored at least 60 points this season. The Baylor defense isn’t producing numbers as gaudy as the offense, but they can’t be underestimated. The Bears are holding opponents down to just 17.4 PPG – 7th best in the FBS. Aside from being 9-0 SU, the Bears are also 8-1 ATS this season.

Bet now on the Baylor Bears.

Betting on the Oklahoma State Cowboys: 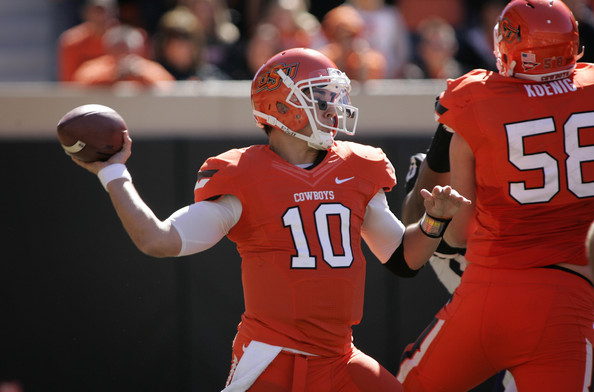 Awaiting Baylor at Stillwater are the Cowboys, who can’t wait to test their 14th-ranked defense against a Bears offense that has crumpled every team in their path.

Oklahoma State is coming off their sixth straight win against No. 24 Texas. As if to send a message to Baylor QB Bryce Petty, the Cowboys forced three turnovers in their 38-13 drubbing of the Longhorns. Clint Chelf threw for 197 yards and two touchdowns and rushed for two more in that game.

The Cowboys are 9-1 SU this season, and thanks to the Red Raiders’ loss to Baylor last week, are now one of the top two teams in contention for the Big 12 championship, the other being Baylor.

The Cowboys are tough to beat at home as they are 10-0 SU and 9-1 ATS in their last 10 home games. But here’s one fact that stands out for this game: Baylor hasn’t won in Stillwater since 1939.