Over the last few years, the Boise State Broncos and Northern Illinois Huskies have been among the winningest college programs in the nation. They’ve also been fixtures during this time of the year, with the Broncos making their 14th straight bowl appearance, while the Huskies are going to play their eighth-consecutive bowl tilt this Saturday.

For more 2015 bowl game previews, you can check out our breakdown of the Marmot Boca Raton Bowl, featuring Toledo and Temple.

Where: University of Phoenix Stadium, Glendale

[sc:NCAA240banner ]The Boise State Broncos didn’t win the Mountain West title, but at least they’re going to play in a bowl game for the 14th straight season.

To get there, Boise State mostly relied on the arm of quarterback Brett Rypien and on the team’s stout defense.  Rypien got the starting job by the third week of the season and proceeded to throw for 2,976 yards and 17 touchdowns to guide Boise State’s offense that averaged 304.6 passing yards per game, 19th overall in the nation.

Rypien had a solid game in the Broncos’ 40-23 win over San Jose State on November 27, passing for 197 yards and two touchdowns without an interception on 25 of 33 completions.

Rypien didn’t have to bust out a big game, though, with running back Jeremy McNichols going berserk for 192 rushing yards and two scores on 20 carries. McNichols should be a prominent weapon for Boise State in the Poinsettia Bowl having averaged 5.6 yards per carry to finish the regular season with 1,244 rushing yards and 18 touchdowns.

With Rypien and McNichols complementing each other, the Broncos have developed an exciting offense that ranks 16th in scoring (37.8 points per game) and 18th in total yards per game (488.6).

Defensively, the Broncos will look to rattle Northern Illinois’ susceptible offensive line that has allowed Ohio and Bowling Green to combine for 20 tackles and four sacks. Boise State allows just 21.3 points and 342.1 total yards per game. 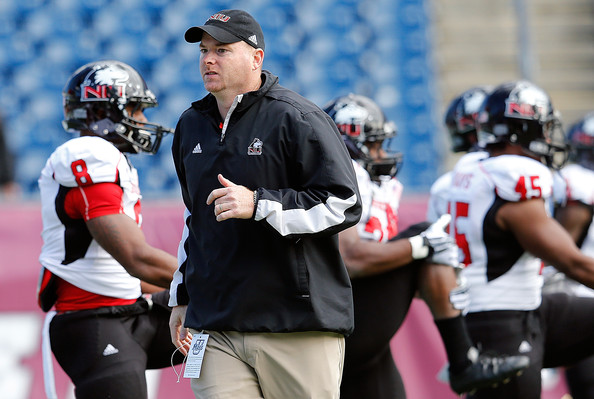 Like the Broncos, Northern Illinois fell short of expectations this year with an 8-5 overall record, though they reached the Mid-American championship game only to get blown to bits by Bowling Green, 34-14.

That said, the Huskies deserved some props for going this far despite an assortment of injuries to their quarterbacks. Original starter Drew Hare hurt his Achilles’ in the Huskies’ upset win over Toledo on November 20 then 10 days later, backup Ryan Graham suffered a leg injury in a loss to Ohio.

It’s not clear yet whether Graham will play in Glendale, but in any case, third-string Ryan Fiedler will be ready to start anew versus Boise State. In two appearances this year, Fiedler has passed for 265 yards and two touchdowns with three interceptions on 21 of 45 attempts.

The Huskies’ quarterback quandary may force them to pound the rock more often than usual on their backfield. After all, Northern Illinois has been a great rushing team this season, averaging 205.1 yards on the ground per game, good for 29th in the nation. As good as Boise State’s defense has been, the Broncos have surrendered at least two rushing touchdowns in five games this year.

Joel Bouagnon is the Huskies’ biggest threat on the ground with the junior running back compiling 1,269 rushing yards and 18 touchdowns on 97.6 yards per game.

Northern Illinois also has a stop unit to reckon with, as the Huskies parade a secondary that features Shawun Lurry, who leads the nation with nine interceptions. Overall, the Huskies’ defense allows 25.5 points and 400.2 total yards per game.