It’s going to be one entertaining game at the 2015 Quick Lane Bowl with the Central Michigan Chippewas’ high-powered passing offense led by quarterback Cooper Rush. They’ll give their opponents, the Minnesota Golden Gophers, all they can handle. The Gophers enter this game despite a 5-7 slate in the regular season.

Can the Chippewas put a stamp on their season with a big win? Or will the Gophers explode for a shot at their first ever bowl victory? Read on for everything you need to know heading into this bowl game.

Catch more exciting college football postseason action with our complete previews for the Military Bowl’s Navy vs. Pittsburgh and the Foster Farms Bowl’s UCLA vs. Nebraska.

Betting on the Central Michigan Chippewas (7-5)

Quarterback Cooper Rush is no stranger to huge games. He’s passed for 3,703 yards and 25 touchdowns this season, leading his team to rank 14th in the FBS with 313.3 yards per game. Rush has been breathtaking this season with eight 300-yard games.

[sc:NCAA240banner ]Minnesota has a solid passing defense that could limit Rush, allowing just 182.4 yards per game (13th in the nation). But the Chippewas quarterback is no stranger when it comes to exceling in the postseason. He was spectacular in the Bahamas Bowl last year, throwing for a whopping 493 yards and seven touchdowns in a 49-48 loss to Western Kentucky.

What makes Rush so dangerous is his ability to spread out his scoring passes to his receiving corps. Ben McCord and Corey Willis lead the team with five touchdowns each. Meanwhile, Jesse Kroll and Anthony Rice rank second on the team hauling in four scoring passes each. Joe Bacci is the only other player with multiple scoring receptions with three.

Central Michigan also excels on the defensive end, ranking 16th in the FBS with just 328.2yards allowed per game. They don’t have plenty of playmakers on the defensive side of the ball, ranking near the bottom of the nation in sacks (123rd), tackles for loss (114th) and interceptions (110th). But they do one hell of a job in getting opponents off the field. The Chippewas rank fifth in the league in time of possession per game, giving their offense 33:39 on the field.

The Chippewas are very live ‘dogs. They’re 7-1 ATS in their last eight games as underdogs.

Betting on the Minnesota Golden Gophers (5-7) 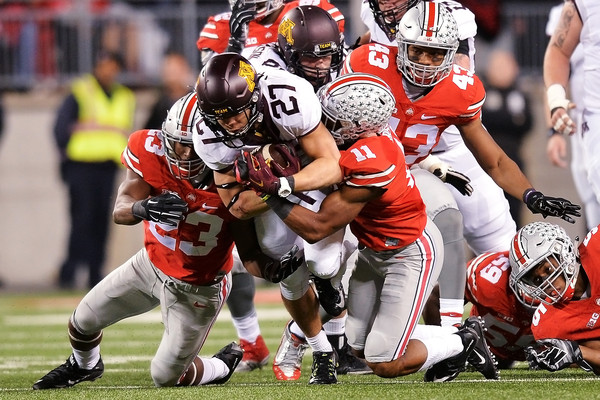 The Minnesota Golden Gopher’s running game disappointed this season, ranking 101st in the nation with just 142.9 yards per game. But they did impress in a couple of solid outings, running for 255 and 326 yards against Illinois (12) and Purdue (Week 6) respectively. Running back Shannon Brooks has been pretty solid when given the chance to shine. He’s run for 644 yards and seven scores on 104 carries. That’s a very solid 6.2 yards per carry.

If the Gophers are to control this ballgame against Central Michigan, then they’ll need to utilize Brooks as much as they can to chew off the clock. They also have a solid backup for a change of pace. Rodney Smith ranks second on the team with 596 yards on 142 carries this season. Brooks and Smith should have their fair share of moments to shine in this game.

Utilizing their running game should disguise quarterback Mitch Leidner’s inconsistency. He’s completed just 57.8 percent of his passes this season with 13 touchdowns and 10 interceptions. But Leidner could have some success airing out the ball against a Central Michigan secondary lacking in playmakers. Central Michigan only has six interceptions this season, 110th in the nation.

How Minnesota’s pass defense holds up against the Chippewas’ aerial attack is the key to this game. The Gophers have limited opponents to just 182.4 yards passing per game this season. A pair of defensive backs, Jalen Myrick and Briean Boddy-Calhoun, solidifies the secondary. Myrick and Boddy-Calhoun have shown some big-play ability this season, each with three interceptions including a pick-six.

While the Gophers dropped four of their last five games this season, they went 4-1 ATS over that span.

The Chippewas (+6) control the ball leading to an upset of Minnesota. Create a betting account now and grab the best odds and lines for this thrilling bowl season.