Both the Pittsburgh Panthers and No. 21 Navy Midshipmen had overachieving seasons in 2015. Pitt, in particular, made unexpectedly quick progress in head coach Pat Narduzzi’s first year in charge.

However, getting to nine wins will be a tall order for the Panthers as they have to play a virtual road game against the Navy Midshipmen, who will be led into the Military Bowl by their record-breaking senior quarterback making his college swansong.

Despite a surprising home loss to Miami in their last regular season game, the Pittsburgh Panthers have still had a very strong first year under head coach Pat Narduzzi. Aside from that loss to the Canes, Pitt’s other three losses came against Iowa, North Carolina and Notre Dame, all of whom finished in the regular season in the top 10 of the AP Poll.

[sc:NCAA240banner ]Pitt’s big strength this season has been its defense – Narduzzi’s calling card – particularly against the run. The Panthers gave up just 126 rushing yards per game, the third-best mark in the ACC. However, that run defense will be put to the test against Navy’s run-heavy triple-option offense.

Pitt will not be strangers to that type of offense, though. The Panthers already prepared for it when it came up against Georgia Tech earlier in the season. They gave up 376 rushing yards and three touchdowns, but still came away 31-28 winners.

On offense, Pitt will also look to pound the ball down Navy’s throat. The Panthers rushed for nearly 186 yards per game, which ranked fifth in the ACC. Quarterback Nathan Peterman has been pretty solid as well in the passing game. The junior threw 19 touchdowns and just five interceptions this season. 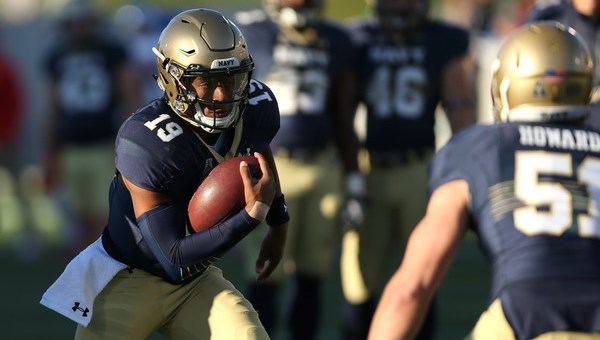 Navy had quite a nice showing in its first season as a part of the American Athletic Conference. Had the Midshipmen beaten Houston, they would’ve played in the conference championship game, and possibly could’ve earned a trip to a New Year’s Six bowl game. As it stands, they’ll be virtually playing a home game in their bowl matchup against Pitt.

Navy’s success this season – and for the past three seasons as well – has been in large part due to quarterback Keenan Reynolds’ brilliance in running their patented triple-option attack, which averaged 36.2 points this season (22nd in the nation).

The senior rushed for 1,229 yards with 21 rushing touchdowns this year en route to setting a new Division-I career rushing TD record with 85 career scores. Reynolds is also just 81 rushing yards away from breaking Denard Robinson’s record for most career QB rushing yards. It’ll be Reynolds’ last game of his collegiate career, so he certainly won’t be lacking in motivation to end it with a bang.

Apart from Reynolds, Navy’s defense has also played a major part in the team’s success this season and will crucial in their bowl matchup. The Midshipmen were 26th in scoring defense (21.3 points allowed per game) and 32nd in run defense (138.4 rushing yards allowed). Slowing down the run will go a long way toward putting the brakes on the Panthers’ offense.