The College Football Playoff picture was shaken up pretty significantly in Week 12, as Ohio State’s loss and Oklahoma’s win altered the final four for the first time in a couple of weeks. And with Rivalry Week coming up and Championship Week to follow, nothing’s set in stone yet – not by a long shot.

Nevertheless, let’s get another updated set of projections for all the New Year’s Six bowl games heading into Week 13 and see why those teams are likely to participate with just a couple of weeks left to go. For more of Rivalry Week’s marquee matchups, check out our previews of the Egg Bowl (Ole Miss vs. Mississippi State) and Clean, Old-Fashioned Hate (Georgia vs. Georgia Tech).

[sc:NCAA240banner ]The winner of Florida State vs. Florida should be virtually assured of a New Year’s Six bowl invite as an at-large team. And even though they’re on the road, the Seminoles have a good chance of emerging on top in their rivalry game. That should put them in the Peach Bowl, which will be held in nearby Georgia.

They’ll likely be matched up with the Midshipmen of Navy, who have looked like the class of the Group of Five teams this season. Judging by how Navy’s triple-option offense has torn through the AAC, it should be able to top Houston on the road this weekend and advance to the conference title game. 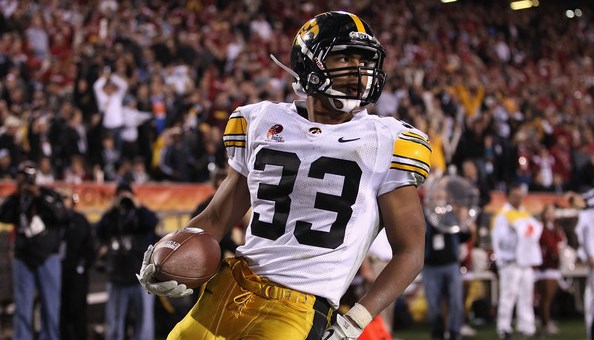 So, the playoff committee finally came to its senses and knocked Notre Dame out of the top four. With just one game left, the Irish need some help to return to that fourth spot. It doesn’t look like the Irish will be so lucky, though. With CJ Prosise banged up and Stanford to come, Notre Dame might just have to settle for a Fiesta Bowl berth.

Iowa is currently in that No. 4 spot over the Irish, but with all due respect to the undefeated Hawkeyes, the odds will be stacked against them in the Big Ten title game. And with a much more interesting matchup lined up for the Rose Bowl, the Hawkeyes will have to content themselves with partying in the Fiesta Bowl.

Speaking of that tasty Rose Bowl matchup, it’d be a shock if Stanford and Michigan don’t get paired up in Pasadena.

Despite its loss to Oregon, Stanford still has the inside track for that ticket to the Rose Bowl. The Cardinal are assured of a Pac-12 championship berth, and look like they have the beating of whoever comes out of the South (USC or UCLA).

That sets up the juicy storyline of ex-Stanford coach Jim Harbaugh leading his Michigan team against the Cardinal. The Wolverines will have to beat Ohio State in The Game to claim that coveted New Year’s berth, but after seeing the Buckeyes implode during (and after) the Michigan State game, their chances of leaving the Big House with a win don’t look too great.

Ole Miss’ strong finish to the season has put it in serious contention for New Year’s Six bowl game, particularly the SEC’s spot in the Sugar Bowl. The Rebels have the high-scoring style that will be very exciting to watch, especially paired up against another high-scoring team like Baylor.

The Bears returned to big bowl contention after dealing Oklahoma State its first defeat of the year. If they run the table against a banged up TCU and the train wreck that is Texas, they should be the Big 12’s rep for the Sugar Bowl. 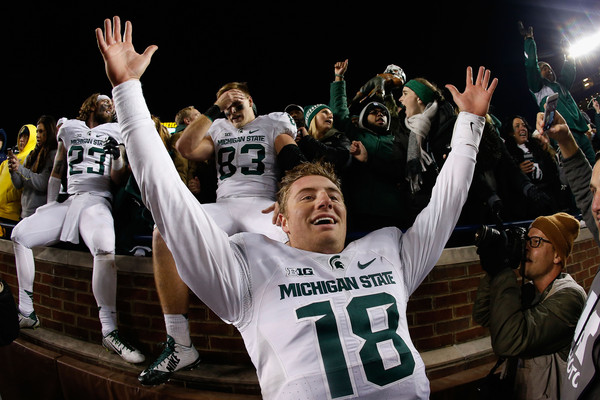 One-loss Alabama is unlikely to move up any higher than No. 2, and that could set them up with a Cotton Bowl clash with Michigan State.

The Spartans are currently on the outside looking in at No. 5 in the rankings, but a Big Ten title win over a potentially undefeated Iowa should be enough to vault them as high as No. 3.

Clemson has its fate in its own hands. If the Tigers win out, that No. 1 seed is theirs. They get to go to nearby Florida for the Orange Bowl, most likely against Oklahoma.

The Sooners are up to No. 3 in the current rankings, but even if they beat Oklahoma State at Bedlam, the absence of a Big 12 title game and that bad loss to Texas could keep them from a higher seeding.

Alabama may be the No. 2 seed, but it’s still the overall favorite at +150 to win the national title. A collision course with Clemson is still the most likely outcome for the title game.

Create a betting account now and cash in on all the best college football action with the College Football Playoff contenders.