The Cowboys can keep first place in the NFC East division with a win against the Bears, who are clouded with a QB dilemma. For Chicago, they can keep themselves from slipping out of contention for the NFC North’s best record by handing the visiting Dallas squad a loss.

Betting on the Dallas Cowboys:

The goal is to win the Super Bowl, but the Cowboys would sure find it nice to steal the NFC East crown along the way.  But first, they have to win each game ahead of them on their schedule. Dallas simply can’t afford to lose, especially with the Philadelphia Eagles banging on the door.

Dallas is coming off a Thanksgiving Day 31-24 win against the Raiders. Tony Romo was not 100% during that game after catching a virus the night before, but still played efficiently. Romo went 23-of-32 for 225 yards and a touchdown with no interceptions.

He also got a ton of support from running back DeMarco Murray, who led the team’s rushing attack with 63 yards and three TDs. The Cowboys average just 85.1 rushing yards per game, but against Oakland, they mustered a formidable 144 yards.

Though defense has not been the strong suite of the Cowboys this season, they seem to have improved judging by their last two games. Dallas is last in the NFL in allowed yards per game (421.6), but did not surrender more than 327 yards in their previous two.

Bet now on the Dallas Cowboys.

Betting on the Chicago Bears: 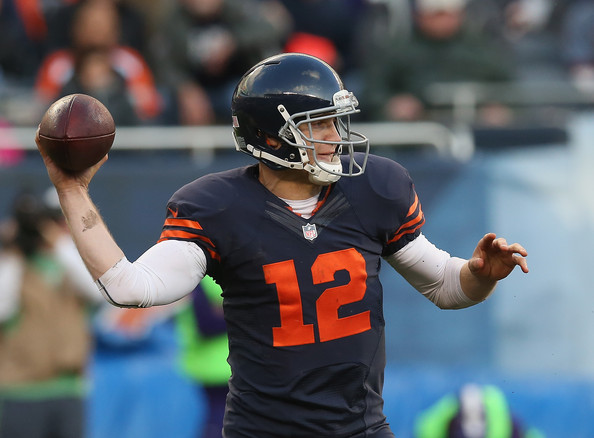 Despite another Bears loss, quarterback Josh McCown turned in another solid performance overall while filling in for the injured Jay Cutler last week against Minnesota. [sc:NFL240banner ]

Cutler’s absence has not affected the passing game of Chicago, which still ranks 6th in the NFL with 271.6 yards per game. McCown finished the game against the Vikings with solid numbers. He went 23-of-36 for 355 yards with two TDs and no picks. It was the second straight outing for McCown in which he has thrown at least 350 yards and two TDs. He also has just one interception in 184 attempts spread over six games this season.

Wide receiver Alshon Jeffery had 249 yards – his highest total of the season – and a pair of TDs after catching 12 of McCown’s 15 passes thrown to him.

The Cowboys and Bears have gone OVER in each of their last three meetings. The Bears are also 2-0 SU in their last two against Dallas.

Bet now on the Chicago Bears.