The Denver Broncos were sent crashing back to earth by the New England Patriots as they were dealt a 43-23 beatdown at Foxborough Sunday. They will look to regain their winning touch this coming Sunday against the Oakland Raiders who are still on the lookout for their first victory of the season.

Read on for a complete preview of this AFC West showdown and while you’re at it, you can check out our previews of Dolphins vs. Lions and Titans vs. Ravens.

Entering the game against New England, most of the headlines revolved around the much-anticipated matchup between legendary quarterbacks Peyton Manning and Tom Brady. At the end of their bruising encounter, however, questions once again emerged concerning the former’s ability to handle the surroundings at Foxborough.

[sc:NFL240banner ]Manning found the going difficult once again at Gillette Stadium, completing 34 of 57 passes for 438 yards and two touchdowns with two interceptions. Those two picks increased his total number of interceptions to 20 in 11 career games against Patriots teams coached by Bill Belichick.

His record at Foxborough now stands at 2-7 with his QB rating now dropping to 78.8. To put that into perspective, his overall QB rating for his career is at 98.0. In their 43-23 defeat to the Patriots on Sunday, the sure-fire Hall of Famer managed to grab a QB rating of just 80.9.

Fortunately for Manning, he gets to play at Foxborough just once a year. To make things even better for the Broncos quarterback, he can quickly erase that bitter taste of defeat as their next opponents will be the still winless Oakland Raiders. The Raiders have allowed an average of 26.4 points per game this season, the seventh-worst mark in the NFL.

That will be music to Manning’s ears as he has powered the Broncos to the third-best offense in the NFL this season with Denver averaging 30.6 points per game this campaign. Manning is expected to give a lion’s share of the possession to his primary target Demaryius Thomas who has been lights out for the Broncos this year.

Thomas leads the league in the receiving department averaging 111.8 yards per contest. He and Emmanuel Sanders (785 yards, 57 receptions) have been a two-man wrecking crew for the Broncos this season as they have led Denver to the second-best passing mark in the league with a 313.5 YPG clip.

The Broncos are 1-2 ATS on the road this season. 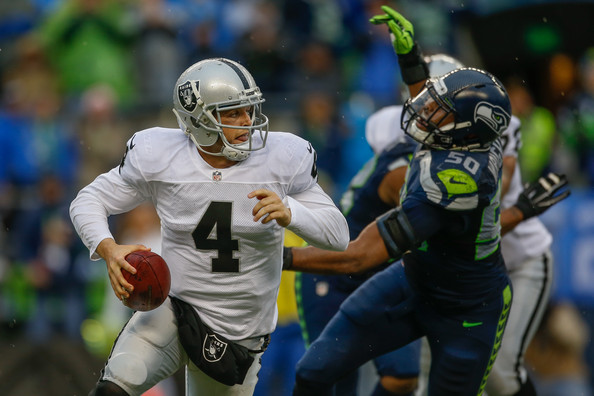 The Oakland Raiders may be winless after eight games but surely they are getting closer to that elusive first victory after falling to the defending Super Bowl champions Seattle Seahawks by just six points on Sunday.

Entering the game as 13-point underdogs, the Raiders staged a mighty second-half comeback to pull to within six but ultimately just run out of time. That was still enough to earn them their fourth win against the spread this season.

They will surely enter their next game against Denver as heavy underdogs considering their six-game difference in the AFC West standings but the Raiders have made huge strides recently to make this such an intriguing contest.

Derek Carr is starting to get more accustomed with the quarterback role, completing 24 of 41 passes for 194 yards and two touchdowns with two picks. He led the Raiders to score 24 points against the vaunted Seattle defense, only the second time they have crossed the 20-point barrier this season.

It has been a struggle for the Raiders offensively this year as they have managed to put up just 16.1 points per game this season, the second-worst mark in the NFL. That clearly wouldn’t be enough against a potent Denver attack that is averaging 407.6 yards in total offense this season, fifth-best in the NFL.

Still, Oakland’s secondary will definitely make things a little difficult for the league’s career touchdown leader. The Raiders are 10th in passing defense this season with opposing teams averaging just 227.6 passing yards against them.

The Raiders are 1-3 ATS at home this season.