Just three weeks into the season and we’re already staring down the barrel of what could easily be the best game on the 2014-2015 NFL schedule. In a rematch of February’s Super Bowl XLVIII, the Denver Broncos bring their retooled defense to Seattle to face the team that inspired its makeover, the Seattle Seahawks.

The Seahawks are coming off a game in which they were surprised by the San Diego Chargers 30-21. The Broncos, in the meantime, have had their struggles while powering to a 2-0 start. Which of these NFL powerhouses will prevail in a game that means so much to both teams? Read on for more on this huge matchup and don’t miss our previews of other Week 3 games like Pittsburgh vs. Carolina and Baltimore vs. Cleveland.

So much for avoiding Richard Sherman. After Aaron Rodgers and the Green Bay Packers did not attempt a single pass on his side of the field in the season opener, the San Diego Chargers threw towards Sherman regularly in Week 2 and got results, completing 60.9% of passes to the right side en route to a 30-21 victory over the Seahawks.

[sc:NFL240banner ]Coming in as one of the most vaunted defenses in NFL history, the Seahawks showed some weaknesses against San Deigo that Peyton Manning and company will want to exploit in Week 3.

First amongst them: endurance. The Chargers had the ball for 42 of the game’s 60 minutes on Sunday and the effort of staying on the field that long showed amongst the Seahawks’ best and brightest. Tight end Antonio Gates took full advantage, catching three touchdowns and 96 yards in the game as he simply outmuscled tired defenders.

So take a lesson, Peyton. Where the Broncos turned the ball over four times in last season’s Super Bowl, Philip Rivers and the Chargers didn’t, taking what Seattle gave them on offense.

Seattle will want to stimulate some of those turnovers and big themselves in Week 3, as they sacked Rivers just once after getting to Aaron Rodgers three times in Week 1, and did not come up with even a single turnover against the Chargers.

Russell Wilson and the Seahawks offense still looks plenty potent this season, when they’ve been on the field. Percy Harvin has looked every bit the playmaker he was supposed to be last season before he went down with an injury, making massive plays in the rushing and receiving game  in both games so far. That said, his tendency to fumble–the 26-year old has two so far–is cause for concern against a team that has all the weapons to take advantage of turnovers.

All told, the key to this game for Seattle will be the play of their all-world secondary. If Sherman and counterparts Byron Maxwell, Kam Chancellor, and Earl Thomas can step up and cover the wide variety of looks the Broncos will throw at them even half as well as they did in the Super Bowl, Wilson should be able to handle the rest. 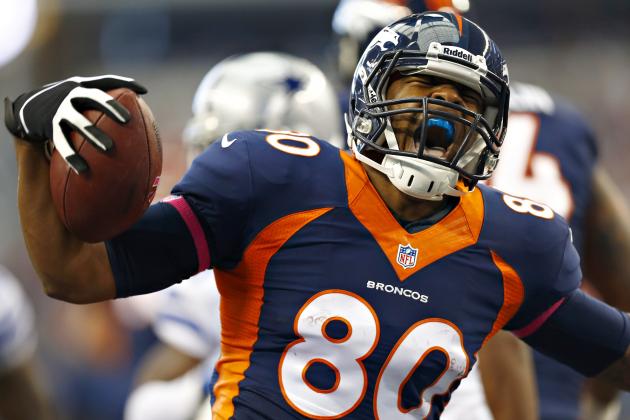 The Denver Broncos invested heavily in improving a defense that let them down in a major way in these teams’ all-important last meeting, their 43-8 loss in the Super Bowl. So far, the unit has looked better, if not best.

Despite surrending almost 800 yards of total offense to the Indianapolis Colts and a mostly Jamaal Charles-less Kanasas City Chiefs team in their first two weeks, the Broncos defense did enough in Week 1 and 2 to show that this is not the same unit that Wilson and Marshawn Lynch picked apart last season.

The Broncos leveraged not one but two goal line stands for the second week in a row to beat Kansas City 24-17 in Week 2 in a game that was almost over several times before the final whistle. New Bronco Aqib Talib thought he had a pick-six on Alex Smith’s last-gasp drive only to have it called back on a penalty. Then DeMarcus Ware–another Pro Bowl offseason acquisition–had his strip sack taken off the board after refs ruled the play was an incomplete pass.

All told, the Broncos defensive picture is rosier than it was last year but still needs to show the consistency and playmaking that it was built for.

The offense, however, looks as good as ever. Peyton Manning went a silly 21 for 26 against the Chiefs and added three touchdowns to keep the Broncos ahead all game long. With Demaryius Thomas, Emmanuel Sanders, and Julius Thomas all catching balls for the future Hall of Famer, Peyton still has the weapons to test this Seattle defense. Plus, ever the student, you can expect Peyton has been looking towards this rematch for months and will have a few ideas about how to breakdown the Legion of Boom.

The key for the Broncos offensively could easily be Julius Thomas. The bruising tight end has 12 catches for 166 yards and four touchdowns in just two games, and has the physical ability to create match up problems for the Seahawks just like Gates did. If Peyton brings his A-game–as he’s been known to do when it matters most–the Broncos offense should do enough to win if their defense doesn’t let them down.

Peyton Manning and the Broncos come out mad and cover, but ultimately lose what should be the best game of the NFL season thus far.