The Detroit Red Wings haven’t exactly been flying high on their travels recently, but they should be very excited for their visit to Dallas on Monday. The Wings have been absolutely dominant at the AmericanAirlines Center over the past few years, and will catch their hosts, the Dallas Stars, in the middle of another bad slump.

Read on below for our preview of Monday’s marquee NHL matchup. And for more top sports action to start the week, check out our previews of Syracuse vs. North Carolina and Kansas vs. Texas.

The outdoors were all the Detroit Red Wings needed to snap their month-long skid on the road. Prior to their 5-3 Stadium Series win at Colorado on Saturday, the Red Wings had lost all six of their road games in February. The Wings’ spotty offense (2.5 goals per game, 21st in the NHL) experienced a sudden surge as it scored the most goals away from home since October 31.

The Wings now have a very good chance of starting a road winning streak when they visit the slumping Dallas Stars. Detroit has gone a perfect 6-0 in its last six visits to Dallas, and has scored five goals or more in four of those games. In the Wings’ most recent visit to Dallas in February 2015, they edged out the Stars in a highly-entertaining 7-6 overtime win.

Veteran Pavel Datsyuk scored four points – two goals and two assists – in that game, as he extended his streak of multi-point games against the Stars to five. He’ll look to keep that impressive run going against a Stars defense that has been hemorrhaging goals in recent games.

Meanwhile, the Red Wings’ defense (2.5 GAA, 11th in the NHL) has turned a corner since allowing 15 goals in a three-game span a couple weeks ago. They’ve given up just seven in their last four games. 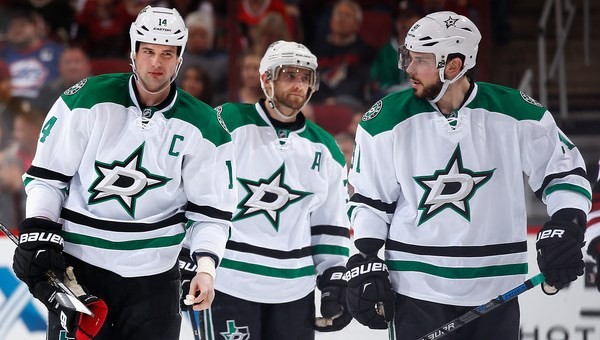 After a very strong start to February, the Dallas Stars are slumping once again. The Stars have gone just 1-4-1 in their last six games, with their most recent loss coming at the hands of the New York Rangers on Saturday.

Kari Lehtonen was in goal for that game as he lost his fourth-consecutive start. He also gave up six goals in a 7-3 loss to the Boston Bruins on Feb. 20. Antti Niemi hasn’t been too great either. He was pulled in their 6-3 loss to the Winnipeg Jets after giving up three first-period goals, and also let in five in a 6-3 loss to the Arizona Coyotes.

With both of their goalies playing very unreliably of late, the Stars will need their stars to shine. Jamie Benn and Tyler Seguin are still No. 2 and No. 3 behind Patrick Kane in the race for the Art Ross with 70 and 68 points, respectively. Seguin had a multi-point game as the Stars beat the Red Wings in Detroit, 4-1, in their November meeting.

However, the Stars haven’t quite been that explosive offense for a while, even at home. They’ve averaged just 2.2 goals in their last 10 home games, and have gone just 1-4 in their last five.

The Stars’ shaky goaltending costs them again as the Red Wings win 3-2 in Dallas.