Considering the Pittsburgh Penguins’ distinction as a preseason favorite, they must be pretty jealous of the red-hot Detroit Red Wings right now. The Red Wings are one of the hottest teams in the NHL as of this moment, and stand a chance to climb up to the East’s top spot. The Penguins are a step behind and haven’t played consistent hockey recently. Read on as we break down this momentous Eastern clash.

The playoff hunt is on. Check out our preview for the Capitals vs. Sharks in an intriguing inter-conference matchup.

The Detroit Red Wings are giving netminder Jimmy Howard a little bit more rest, but they’re in good hands with the hot hand of third-year goaltender Petr Mrazek. The Czech has won three-straight on the road, posting a 0.67 goals-against average. Mrazek has also keyed Detroit’s current 9-1 run, which has the team just three points shy of the Atlantic-leading Tampa Bay Lightning.

[sc:NHL240 ]Mrazek will start against the Penguins for the first time in his career. Games between Pittsburgh and Detroit have been as even as it could get. The Red Wings have split their past eight games against Pittsburgh and have allowed an average of three goals over those contests. The last three games have gone past regulation.

While Mrazek takes care of business between the pipes, Detroit’s points-leader Henrik Zetterberg directs the attack. Zetterberg had a goal and two assists in Detroit’s 4-3 home victory over the Penguins on October 23. He has 12 points on an eight-game point streak in matchups against Pittsburgh.

Niklas Kronwall offers some support from the blue line. He had two goals and an assist on October 23, and has eight points on a six-game streak against the Penguins.

Can the Red Wings keep soaring to the top of the East? Create a betting account now and make your pick. 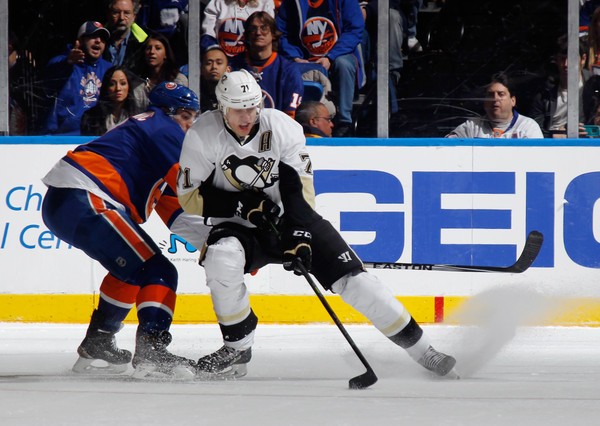 While the Red Wings field an inexperienced but hot-handed goalie between the pipes, the Pittsburgh Penguins start a proven pro. Marc-Andre Fleury has recorded back-to-back shutouts in his last two starts. He leads the NHL with eight shutouts this season.

Detroit has been one of Fleury’s toughest opponents, though. He’s never shutout the Red Wings, which will make his personal record of three-straight shutouts a challenge. The total has gone under in Fleury’s last six starts.

The pressure will be high on Fleury to perform, especially with the Penguins’ recent offensive struggles. Pittsburgh has averaged two goals per game over an 11-game span (4-5-2). The Pens have also been shutout three times over their past six games.

The Penguins’ attack may take a step forward with Blake Comeau returning from an upper-body injury, which caused him to miss 20 games. He had two assists against Detroit in October and has 11 goals throughout the 32 games he’s played this season. Pittsburgh is 7-0-2 when Comeau scores.

Missing plenty of games may leave Comeau shaking off the rust, which leaves the door open for Evgeni Malkin and Sidney Crosby to power the offense. Malkin, the Penguins leading goal-scorer (20 ), has three goals and three assists over the past three matchups against Detroit, while points-leader (56) Crosby has three points.

The Red Wings are currently the hottest team in hockey. Take them at +120.

For an extra payday, take the total to go under 5.5 for a play on Detroit’s hot-handed goaltender and Pittsburgh’s anemic offense.