In-state, in-division, or in-conference, the Florida Gators have rivals from all over the looking to take them down a peg. Five teams in particular have just the right amount of history, animosity and competition to serve as the Gators’ most significant rivals.

5 of the Florida Gator’s most fierce football rivalries:

Even before the heyday of Bobby Bowden, the Florida State Seminoles have long been the Gators’ arch nemeses.

More than just the battle for in-state bragging rights and Florida football supremacy, this great matchup has often had national championship implications, including the famous 1997 Sugar Bowl, which Florida won emphatically, 52-20.

Though both teams have produced significant winning streaks, the series is almost even over the past four decades, with Florida holding a slim 20–19–1 advantage over the past forty games.

Designated as Florida’s permanent inter-divisional football rivals from the SEC West, LSU is one of the toughest games on the Gators’ calendar every year.

In the mid-2000s, this SEC clash would essentially be the BCS title decider, as the winner of Florida–LSU went on to win the national championship game from 2006-08.

With few exceptions, this rivalry has been known for close games in recent years, with both teams usually coming into the match-up highly ranked and looking to win. 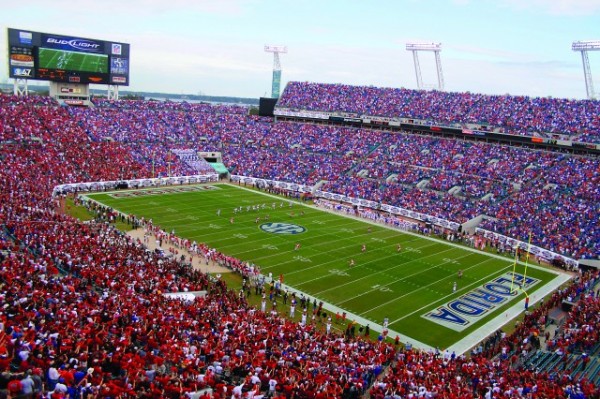 Whether you call it “The World’s Largest Outdoor Cocktail Party,” “Florida vs. Georgia Football Classic,” or the “Florida–Georgia Game,” this matchup has historically produced great games, often with major implications for the SEC East.

Despite Georgia having the overall advantage, Florida has won 18 out of past 23 meetings.

The seminal moment in this rivalry came in 1995 when Steve Spurrier famously ran up the score against Georgia, much to the ire of Bulldogs fans, and scored “half-a-hundred,” or 52 points, against the Bulldogs on their home turf.

The two traditional powers of the SEC East, Florida and Tennessee have combined to represent the division in the SEC Championship Game fifteen times in twenty seasons.

The two schools had some epic runs of success during the heydays of Danny Wuerffel and Peyton Manning, with each school winning a national championship in the 90’s.

Unfortunately, the rivalry that once had national title implications has now become one-sided, with Florida taking it to Tennessee eight straight times.

Although Florida and Alabama aren’t annually scheduled to face each other in the regular season, the two SEC powerhouses have been well-acquainted with one another in the postseason.

Since the institution of the SEC Championship Game, no two teams have faced off against one another more than ‘Bama and Florida. The Gators hold the edge over the Crimson Tide in their head-to-heads (4-3) as well as overall SEC titles (7).

However, the Tide can boast their advantage in the biggest prize of all: they’ve won four national championships in that span, compared to Florida’s three.

Do you think any other school that deserves a place on this list? Check out the latest odds and lines of the next Florida game in Top Bet Sportsbook.