All eyes are on the Florida State Seminoles this season. In addition to being the defending champions, the Seminoles also return to action with Jameis Winston at the helm, who has a shot at being the first back-to-back Heisman Trophy winner since Archie Griffin did it in 1975.

With so much pressure on the Seminoles, can they begin the season on the right foot, or will the Oklahoma State Cowboys serve up college football’s first upset of the season right out of the gate? Check out our preview and prediction for the ACC here and don’t miss our coverage of all the Week 1 college football action here.

[sc:NCAA240banner ]Jameis Winston is undoubtedly the Seminoles’ anchor, and the Seminoles will go as far as where the reigning Heisman Trophy winner will take them. But he’s still going to need help, which he’ll have to get from the team’s imposing defense, which a year ago was ranked best in the FBS.

The Seminoles had the best scoring defense in 2013, making opponents bleed just to score an average of 12.1 PPG against them. The ‘Noles are especially adept defending against the pass, as they ranked No. 1 in passing defense (159.7 yards allowed) last season.

Despite losing All-American cornerback Lamarcus Joyner and safety Terrence Brooks, the passing and overall defense remains sturdy, thanks to Florida State’s incredible depth at almost every position. Easing the losses of some of the starters on defense are cornerbacks P.J. Williams and Ronald Darby, and safeties Nate Andrews and Jalen Ramsey.

On offense, Winston will have ample targets down the field led by wideout Rashad Greene (2013: 1,128 receiving yards, 9 TDs). He’ll be flanked by Scooter Haggins and Jesus Wilson. Tight end Nick O’Leary is another weapon for Winston. O’Leary, the school’s all-time leader in touchdowns by a tight end with 11, had 33 receptions for 557 yards and seven TDs last year. Expect those numbers to be even better this 2014, as he’s pegged to be the second option for Winston behind Greene.

Dating back to 2012, the Seminoles are 9-0 SU in their last nine road games. Last year, the Noles went 5-0 SU and 4-1 ATS on the road during the regular season.

Create a betting account now and cash in on college football games all season long. 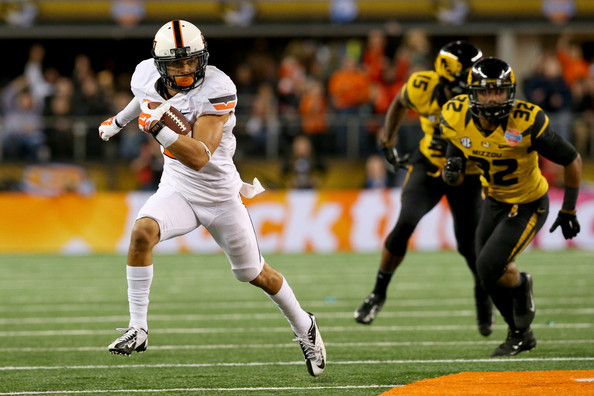 The Cowboys like to score, a trait evidenced by their 39.1 PPG average last season (15th in the FBS). However, the offensive end of this roster looks very different in 2014.

The passing game took the heaviest blow, as the teams top two receivers in 2013 are also gone. That leaves a bunch of sophomore pass catchers, particularly Jhajuan Seales (571 yards with 5 TDs in 2013) and Marcell Ateman (22 receptions for 276 yards) to try to sustain the Cowboys’ passing attack, which finished 30th in the FBS a year ago in yards with an average of 276.8 per game.

Without those stars, puncturing the soul-crushing defense of the Seminoles by air will be that much more difficult.

Where the Cowboys might have improved is on their rushing attack. Their leading rusher in 2013, Desmond Roland (811, 13 TDs) decided to stay in Stillwater and is set to have a new explosive partner in Tyreek Hill, who was a heavily recruited speedster out of at Garden City Community College (Kansas). Hill rushed and received for 1,191 total yards with 11 touchdowns last year.

This is going to be a blowout win for the Seminoles who’ll win and cover the spread as 17.5-point faves.