College football is so close you can just about smell it. Just in time, we’re breaking down everything bettors and fans alike need to know about each of the major college football conferences. With the SEC and Big Ten done and dusted, we now head to the home of the reigning national champions, Florida State: the ACC.

The Florida Seminoles were the biggest (and often only) story in the ACC last season, thanks to their sheer dominance. Unless something completely unexpected like a Jameis Winston injury, this season is heading a similar direction. Read on for more on the Atlantic Coast Conference, and don’t miss our complete predictions for the 2014-2015 college football season.

With reigning Heisman Trophy winner Jameis Winston returning at quarterback this season, the Florida State Seminoles will be coming into the 2014 season as arguably the best team not just in the ACC but in all of college football. And while the ‘Noles swept all before them last season, they could have an even easier time conquering  the conference after their main rivals were severely weakened in the offseason.

[sc:NCAA240banner ]Despite having a terrific defensive line led by All-American DE Vic Beasley, Clemson lost the incredible duo of Tajh Boyd and Sammy Watkins, which should see their offense take a major step back this season. The Tigers are +800 to win the conference, but that’s highly dependent on them beating Floida State, which no one did last season.

Without quarterback Teddy Bridgewater and head coach Charlie Strong, who left to take the Texas job, Louisville doesn’t figure to be much competition in its first season in the ACC after the team finished second in the AAC last season. And over in the Coastal Division, there’s hardly a team that would break the Top 25 rankings, much less push the Seminoles in the conference title game.

There is no disputing the Florida State Seminoles as the clear favorites in the ACC. They strolled through the conference in emphatic fashion by going a perfect 8-0 with a winning margin of 39 points. They then drubbed Duke 45-7 in the championship game before narrowly edging the Auburn Tigers to win the BCS National Championship. This season, the ‘Noles are massive -350 favorites to take the ACC yet again.

Winston may have lost Kelvin Benjamin and Devonta Freeman to the NFL, but top receiver Rashad Greene (76 catches for 1,128 yards) and running back Karlos Williams (730 rushing yards and 11 TDs) both return for their senior seasons to provide Winston with two potent weapons.

Create a betting account now to cash in on a heavy favorite to win the national championship. 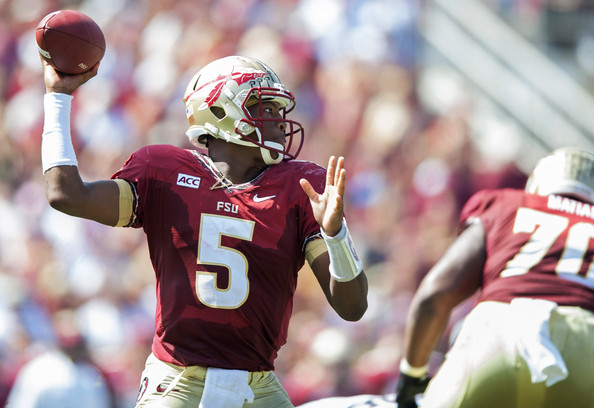 Winston had a stellar college debut recording 4,057 yards in a single season. He also set a new ACC single-season record for most touchdown passes and the FBS record for most touchdown passes by a freshman. This year, Winston will be working with a modified group of wide receivers. How his game responds will be a telling factor on his individual talent as well as the team’s success in the upcoming season.

Still, Winston is set for another stellar season, and he is at the head of the pack in the race for the 2014 Heisman Trophy. The quarterback is +300 to win a second trophy.

The Florida State Seminoles have a relatively light schedule which they could so easily steamroll en route to another undefeated, championship-winning run this season. If anyone is capable of challenging, much less beating, the ‘Noles, it would be the Clemson Tigers.

The Tigers’ Vic Beasley will be a tough challenge for the Seminoles’ offensive line, and will bring the pressure on Jameis Winston whenever he can.

This game between two of the top teams of ACC will also likely determine which team will take the ACC title in December.

The Florida State Seminoles will have another undefeated run through ACC, only being surprised by a few close calls. Take them to go over their season wins total of over/under 11.5 for a little extra value.