The college football regular season is coming to a close, and so is the Heisman Trophy race. Derrick Henry has emerged as the big favorite to come away with the award in New York, but a couple of his top challengers have one more chance to make their case.

Let’s survey the case of the top five candidates for the prestigious award, and see their latest odds to come away with the hardware. Meanwhile, preview some of the top conference title games featuring Heisman hopefuls with North Carolina vs. Clemson and Florida vs. Alabama.

There’s hardly been a more dominant player during the homestretch of the college football season than Derrick Henry. The Bama running back has been simply unstoppable in conference play, where he’s averaged close to 180 yards per game with 13 touchdowns.

[sc:NCAA240banner ]After he thoroughly outdueled LSU’s Leonard Fournette, he added yet another signature performance with a career-high 271 rushing yards in the Iron Bowl.

At -800, the Heisman is now very much Henry’s to lose. But just to be sure, another game-winning performance against Florida in the SEC championship game should seal the deal for Henry’s Heisman win.

As the star quarterback of the No. 1 team in the country, Watson has the best shot out of the remaining contenders to take the Heisman from Henry at this late stage.

The true sophomore, who’s currently priced at +500, has been the driving force in the Tigers’ march to the College Football Playoff. He’s in the top 10 in the country in passer rating and total offense, and has accounted for 36 touchdowns this season.

At this point, it’ll take another huge performance from Watson in the ACC championship against North Carolina to close the gap on Henry. But with UNC’s defensive struggles, especially against the run, don’t discount the possibility of Watson racking up some monster numbers. 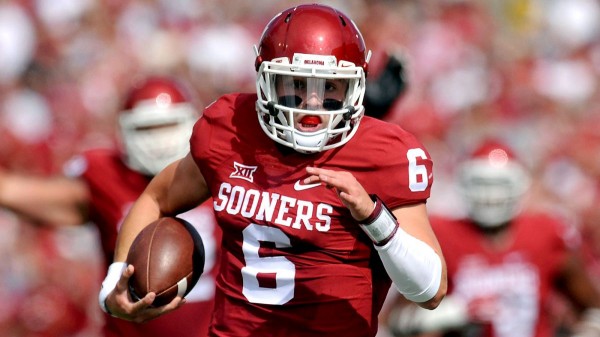 There’s no doubt that Baker Mayfield’s emergence has been a big part of the Sooners’ run to the College Football Playoff. The junior transfer is tied for third in the nation in passer rating, is fifth with 35 touchdowns and has thrown just five interceptions.

However, he didn’t get much of an opportunity to pad his stats in his last two games of the season, as he got injured against TCU and just burned off clock in their blowout of Oklahoma State. Nevertheless, Mayfield has likely done enough to warrant an invite to New York as a finalist. His +1,000 odds are pretty unlikely to pay off, though.

All-purpose machine Christian McCaffrey has had a superb sophomore season for the Stanford Cardinal. With his work as a runner, receiver and kick returner, McCaffrey leads the nation with 253 all-purpose yards per game, almost 50 yards more than his nearest competitor.

But as good as McCaffrey has been, he’ll likely need something close to a superhuman all-purpose effort in the Pac-12 championship game against USC for his +1,000 Heisman odds to pay off.

Ezekiel Elliott made headlines for all the wrong reasons after Ohio State’s loss to Michigan State, which probably ended the Buckeyes’ playoff hopes. But Zeke gave his Heisman hopes one last push with 214 rushing yards and two touchdowns in a game-winning performance against Michigan. But with no Big Ten title game to help his resume further, Elliott’s +1,500 odds aren’t particularly appealing.