The last time the Oakland Raiders won a regular season NFL game was against the Houston Texans back in November of 2013. The Raiders will have another chance to get back in the winning column when they host a much-improved Texans team at O.co Coliseum in Week 2 of the 2014 season.

Sunday’s a full day of football action. Check out our preview of the Sunday Night Football game between the Chicago Bears and San Francisco 49ers or our complete picks and predictions for Week 2 and read on for everything you need to know to bet on the Texans and Raiders game below.

The Houston Texans started their 2014 season on a good note with a 17-6 win over Washington on Sunday. They’ll have a chance to record back-to-back wins when they challenge the Oakland Raiders, a team that stunk up the field against the Jets in week 1. Despite going just 1-7 on the road last season, the Texans did go 3-5 ATS.

[sc:NFL240banner ]However, the Texans will be without their top rookie draft pick Jadeveon Clowney, who exited his NFL debut with a torn meniscus. Clowney is expected to be sidelined for four to six weeks, which will significantly shorten his rookie season.

Despite missing Clowney, the Texans still have an excellent pass rusher in J.J. Watt to shore up their defense. Watt will be a live threat to the Raiders’ rookie quarterback Derek Carr, much like he was against RG3 last Sunday. Watt had a sack, two tackles for loss and five QB hits against Washington in Week 1.

Overall, the Texans defense allowed 372 yards but only three third down conversions on 12 attempts against the Redskins.

Offensively, QB Ryan Fitzpatrick had a steady debut as he completed 14 of 22 passes for 206 yards and a touchdown. Fitzpatrick has a couple of capable targets in Andre Johnson and DeAndre Hopkins. Johnson caught six for 93 yards on nine targets, while Hopkins had four receptions for 89 yards, highlighted by a 76-yard touchdown catch.

Running back Arian Foster rounds out the Texans’ offense, having put up 103 yards on 27 carries for an average of 3.8 yards per rush. It could be a big day for Foster against the Raiders, who allowed 402 total yards last week, including 212 on the ground.

The total has gone over in five of the Texans’ last seven games as favorites.

Sundays are profitable again. Create a betting account now and start building your bankroll now that we’ve had a first look at each team. 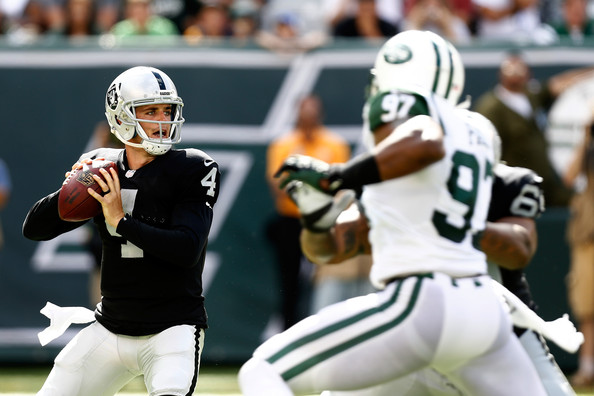 Despite winning two of their preseason games, the Oakland Raiders are back to their losing ways after falling to the New York Jets 19-14 on Sunday. They’re in for another rough night when they host Houston as three-point underdogs Sunday. The Raiders are 3-12 as underdogs since September 2013.

Rookie quarterback Derek Carr completed 20-of-32 passes for 151 yards and two TDs in his NFL debut, one each to wide receivers Rod Streater and James Jones. The Raiders favored short passing plays, which was understandable given their rookie QB was making his first start. But it only brought them an average of 4.72 yards per throw, a rate they’ll need to increase against the Texans.

Oakland’s running game also wasn’t able to cover much ground. They only managed a measly yard per rush on 15 carries. Overall, the Raiders managed a total of 158 yards throughout the game, just 26 of which were on the ground.

Still, Oakland’s rushing attack may be its best hope going forward this season. Maurice Jones-Drew and Darren McFadden were expected to get things done between the hash marks in 2014, and should get better looks against the Texans, who ranked 23rd in rush defense last year and allowed 131 yards in week 1.

Defensively, the Raiders were also disappointing. While they forced two turnovers and allowed only two touchdowns, they allowed the Jets 212 rushing yards. They’ll find themselves in more trouble on the ground, especially if they face a healthy and confident Arian Foster, who rushed for three-consecutive 1,000-yard seasons at the peak of his health.

The Oakland Raiders are 0-4 SU/ATS in their last four home games.

Houston Texans (-3) win by at least a touchdown. Take them to win and cover the spread.