Something’s gotta give this coming Sunday when the Indianapolis Colts square off with the Jacksonville Jaguars in a battle of winless teams. After suffering frustrating defeats to the Philadelphia Eagles and Washington Redskins in Week 2, respectively, the Colts and the Jaguars will be desperate to notch their first wins of the season and in the process kick-start their 2014 NFL campaigns.

Read on for a complete preview of this AFC South showdown and while you’re at it, you can check out our complete NFL Week 3 predictions.

It’s still too early to push the panic button but there is legitimate concern among the Indianapolis faithful with the way their team is playing after the Colts succumbed to their second-consecutive defeat against the Eagles on Monday night to open the season 0-2.

[sc:NFL240banner ]It is the first time Indianapolis have started the season 0-2 since head coach Chuck Pagano and quarterback Andrew Luck joined the Colts back in 2012. They easily could have been 1-1 however if not for the costly turnovers they committed late in the game against the Eagles.

The biggest blow was Luck’s turnover late in the fourth quarter. With 5 minutes and 15 seconds remaining in the game, and with the Colts leading by seven, Luck had the perfect opportunity to drive home Indianapolis’ advantage. Luck (20-of-34, 172 yards, 3 TDs) was intercepted at the Eagles 16 by safety Malcolm Jenkins, dooming the chances of the Colts.

In order for them to get their first win against the Jaguars this coming Sunday, the Colts will have to limit their own mistakes. Aside from Luck, running back Trent Richardson also had a bad day at the office as he committed two fumbles, including a crucial one in the third quarter that led to a LeSean McCoy touchdown.

Speaking of McCoy, the Colts also had a hard time dealing with him and another running back in Darren Sproles. The Colts missed a number of tackles against the two Eagles backs as they combined for a total of 280 yards from scrimmage, including a whopping 152 receiving yards from Sproles.

Luckily for them, they will next face a Jaguars side who is struggling mightily with the running game. The Jaguars are worst in the league in rushing this season with a woeful 44.5 yard per game average.

One man who could help the Colts take advantage of Jacksonville’s weak rush defense is Ahmad Bradshaw. Despite thoroughly outplaying Richardson in Indianapolis’ backfield through two games, averaging 5.3 yards per totes on the ground and catching ten passes for 96 yards and two touchdowns, he is still standing second fiddle in terms of opportunities. If Pagano can get his head around which player is more dangerous/ reliable in this game, that could be trouble for the Jaguars.

The Colts are 7-3 in their last 10 games with the Jaguars at EverBank Field. 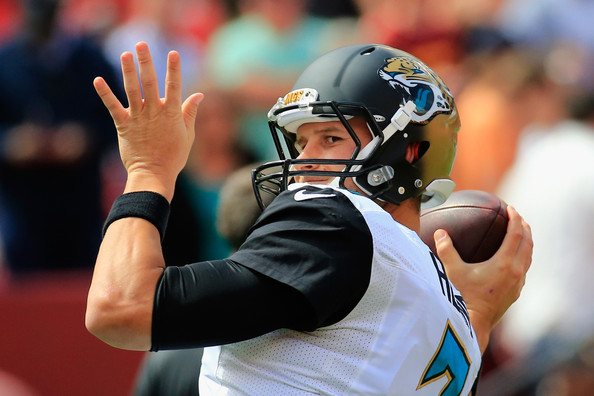 After storming to a 17-0 halftime lead in their opening game against the Philadelphia Eagles, it seemed like the Jacksonville Jaguars were ready for a breakout season. With two games already in the books, let’s just say it was just an illusion after all.

They allowed the Eagles to score 34 second-half points to turn a 17-0 lead to a 34-17 defeat. To make matters worse, they followed that up with another heavy loss, this time a 41-10 rout at the hands of the Washington Redskins. Even without star quarterback Robert Griffin III and wide receiver DeSean Jackson, the Redskins were too much for the hapless Jacksonville side.

Ever since that memorable first half performance against Philadelphia, they have been outscored 75-10 by their opponents. So what seems to be the problem for the Jags this time around?

Where to start? The Jaguars’ offensive line has been totally non-existent so far this season. In the game against the Redskins, the Jags allowed a franchise record 10 sacks. That is simply not acceptable in this level of competition.

When the O-line isn’t working, then the running game naturally suffers as well. In the game against Washington, the Jaguars ran the ball a total of just 10 times with the longest gain a 12-yard scramble by QB Chad Henne.

Through two games, the Jags have rushed for just a total of 89 yards, averaging a gross 2.5 yards per attempt. Some of that is the line, and some of that is on Toby Gerhart, who was brought in as the answer for Jacksonville’s ailing backfield and has thoroughly disappointed so far, totally just 50 yards on 25 carries.

Apart from the offense, the Jacksonville defense is also in total disarray. They are fourth-worst in the league in total yards allowed with opponents averaging 434.5 yards against them this season. They have allowed the most number of points (75) this year and it won’t get much easier for them as they will face the defending AFC South champions Indianapolis Colts next.

Even with their current problems, the Jaguars can take heart in the fact that they have done quite well against their fellow AFC South rivals recently. They have won three of their last five meetings with AFC South opponents dating back to November of last year.

The Colts (-6.5) trounce the Jaguars to register their first win of the season.