The AFC South title is there for the Houston Texans to grab and they could take it home with them if Cincinnati beats the Broncos on Monday. Regardless of what happens Monday night, the Texans intend to end the regular season with a win at home when they take on the Jacksonville Jaguars this coming Sunday.

The Jaguars are about to finish another losing season, but it would be nice for them to even up their regular season series with Houston.

For more Week 17 game previews, you can also read our breakdown of Titans vs. Colts.

Betting on the Jacksonville Jaguars (5-10)

[sc:NFL250 ]Apparently, an injured Drew Brees and a second string New Orleans running back were still too much for the Jaguars’ punching bag defense, as Jacksonville lost to the Saints on Sunday, 38-27.

Jacksonville had zero answers for Brees, who torched its defense for 412 passing yards and three touchdowns without an interception. Tim Hightower was barely touched, too, as he ran for 122 yards and two touchdowns.

If the Jags are going to show up with that kind of defense next week, then they might make another middling quarterback in Brandon Weeden look like a Pro Bowler, just like they did in their first meeting with Houston when they let Brian Hoyer compile 293 passing yards and three touchdowns without throwing a pick.

On other side of the ball, Blake Bortles will have to once again deal with Houston’s imposing pass defense that allows just 212.2 yards per contest. Bortles always has the potential to have a big game, but he’s also being limited by a weak protection unit that has allowed him to get sacked 43 times on the season, fourth most in the NFL.

In their first meeting with the Texans, Bortles passed for 331 yards and three touchdowns with three interceptions, while getting sacked three times.

Jacksonville is 2-1-1 ATS in its last four road games.

Betting on the Houston Texans (8-7) 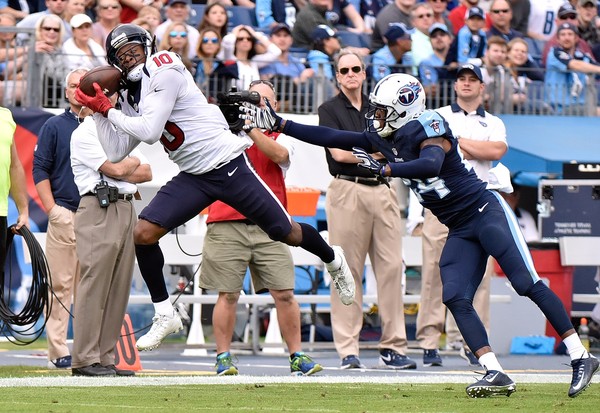 Brandon Weeden is finding the success he didn’t have with the Cowboys in Houston. He improved to 2-0 as the Texans starter this season, when he led the Texans cruise past Tennessee on Sunday, 34-6. The Texans can make it three in a row with Weeden under center next Sunday against a Jacksonville team that has always looked lost on defense.

Against the Titans, Weeden passed for 200 yards and two touchdowns without an interception, while also scoring his first career rushing touchdown. He also seems to be enjoying his new toy downfield in DeAndre Hopkins, who has recorded 211 receiving yards and a touchdown in the past two games.

Hopkins must be amped up at the prospect of facing the Jaguars’ poor secondary again. After all, Hopkins laid waste to the Jags in the October meeting, wherein he turned 10 catches into 148 yards and a pair of scores.

Also excited to see the Jaguars again is a Texans defense that forced Jacksonville to commit three turnovers in the earlier matchup. Andre Hal, who leads the team with three interceptions, had one of Bortles’ three picks in that game, which he returned for a score.

Houston is 4-1 SU in its last five home games against the Jags.