After three-straight blowout defeats, the Jacksonville Jaguars are on pace for another season to forget. However, the Jags have announced that they will start rookie quarterback Blake Bortles. In the meantime, the San Diego Chargers are on a roll after defeating the Buffalo Bills and Seattle Seahawks in back-to-back games, and will give the newly-minted signal caller all he can handle in Week 4.

Can the Jags’ rookie quarterback give them a chance for a win? Or will the Chargers steamroll past their opposition? Read on for our breakdown of this upcoming football action, and don’t miss our complete Week 4 picks and predictions.

After going 4-for-7 for a measly 33 yards in a 44-17 loss to the Indianapolis Colts on Sunday, Jaguars coach Gus Bradley benched starting quarterback Chad Henne in favor of third-overall draft pick Blake Bortles.

[sc:NFL240banner ]Bortles performed better than Henne, throwing for 223 yards and two touchdowns to wide receivers Allen Hurns and Cecil Shorts III in the second half against the Colts. The rookie QB also added significant yardage on the ground rushing for 30 yards on just two attempts. With his dynamism, Bortles should be able to breathe some life into a struggling Jags offense. Yet, Bortles showed that he is still green around the edges as he launched two picks while going 1-for-5 in his first five pass attempts.

Bortles won’t get any breaks as he is set to go against the San Diego Chargers for his first start as a pro. The Chargers are coming off racking up three sacks against the Buffalo Bills and two sacks off the defending Super Bowl champion Seahawks.

Still, the Jags’ rushing offense continues to disappoint with rushing leader Toby Gerhart only averaging two yards per carry. The Jags will likely continue their struggle in the run game as the Chargers have already shut down the running games of Buffalo and Seattle, two of the best rushing offenses in the league. 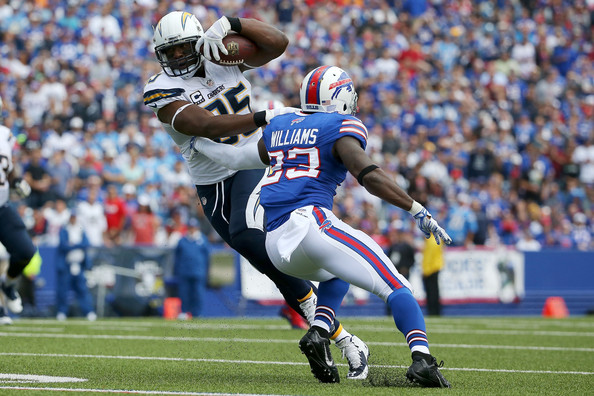 The San Diego Chargers have momentum on their side. A week after a 30-21 upset victory over Seattle, they easily took care of business at Buffalo winning 22-10 on Sunday. They’ll be very confident heading back home, especially going against a rookie quarterback in the Jags’ Bortles. Dating back to last season, the Chargers are 4-0 as home favorites.

The Chargers will be able to open up against the Jaguars’ horrible defense, which allows 306 passing and 160 rushing yards and 39.7 points per game. The Chargers haven’t been able to get significant yardage on the ground so far this season, and may continue to struggle to do so given the injuries to running backs Ryan Mathews and Danny Woodhead, but their passing game can more than make up, especially against a lax Jacksonville defense.

Antonio Gates had one of the worst outings of his career catching the only pass thrown his way for eight yards against Buffalo. But look for Phillip Rivers to reconnect with his he tight end, who is averaging 13.6 yards per reception and already has three touchdowns, against the Jags. In its last seven games, Jacksonville has allowed 110 catches to opposing tight ends for 1,257 yards and 13 touchdowns, including two last Sunday against the Colts.

Still, the Chargers have a deep and talented pool of receivers even without Gates. Rivers had six different targets in the game against Buffalo, five of them averaging 10 or more yards per reception. The biggest contributor was No. 1 wide receiver Michael Floyd who had two 49-yard receptions. In the meantime, WR Eddie Gordon proved useful inside the red zone catching two touchdowns.

Despite being just 2-1 straight up to start the season, the Chargers have covered the spread in all three of their games.

Bortles may lead a couple of noteworthy drives and scores, but Rivers will get the job done against an ailing Jaguars defense. Take the total to soar over 45.5 as the Chargers put on a show at home.

Create a betting account now and cash in on all the football action.