The Kansas City Chiefs kept themselves in the playoff picture after defeating the New York Jets in Week 9. The Buffalo Bills, meanwhile, have the same 5-3 record as the Chiefs but have a lower win percentage against conference opponents, making them a team on the outside looking in for a postseason spot. A win against Kansas City, however, would strengthen their chances of making the playoffs.

We’ve got a ton of NFL game previews for Week 10, including Bears vs. Packers, which you can read here, as well as Browns vs. Bengals.

The Chiefs (5-3) took another step away from their bad 0-2 start, winning over the slumping New York Jets Sunday, 24-10, last weekend. It was the third straight victory for the Chiefs, who now sit in second place of the AFC West, thanks to that win and a loss by the San Diego Chargers to the Miami Dolphins.

[sc:NFL240banner ]The Chiefs, however, have little to feel ecstatic about their performance, particularly in the second half. Kansas City only managed to score one field goal in the second half after scoring 21 in the first two quarters.

Given the fact that New York doesn’t possess a spectacular secondary unit (they have just one interception to this season), it’s a concern that Alex Smith was only able to pass for 199 yards. Smith managed two touchdown passes on 21 of 31 attempts but could have done more, since Jamaal Charles and the rest of Kansas City’s backfield were having a tough time against a pesky Jets defense against the rush.

Kansas City was only able to gain 113 yards on the ground in that game. The team’s leading rushers Charles (78 yards vs. Jets) and Knile Davis (9 yards) apparently are not out of the woods yet as the Bills are ranked eighth in the NFL with only 92.2 rushing yards allowed per game.

The Chiefs are 6-1 SU/ATS in their last seven games overall. 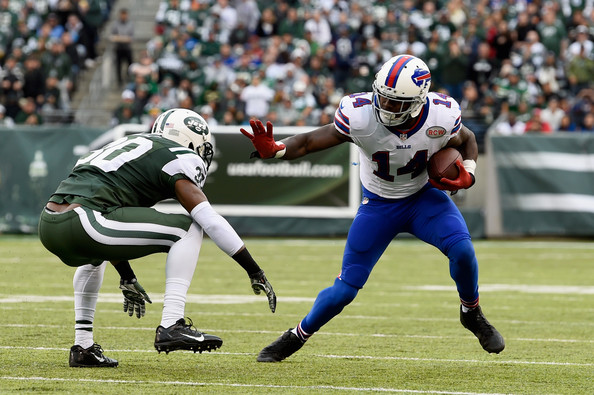 Like Kansas City, the Bills were also last seen on the field feasting over the hapless Jets, whom Buffalo defeated 43-23 before heading to its Week 9 bye. With an extra week of rest and a passing game that has seen improvement under Kyle Orton’s watch, the Bills are looking to extend their winning streak to three games when the Chiefs roll into Ralph Wilson Stadium on Sunday.

Through five games of starting duties, Orton has compiled 1,121 passing yards and nine touchdowns on 95 of 141 attempts for a passer rating of 104.0. One player who seems happy with the switch is rookie wideout Sammy Watkins. Since Orton became the starter, Watkins has collected 393 receiving yards and three touchdowns.

With Manuel at the helm, Watkins only had 284 receiving yards and two touchdowns. Orton and Watkins, however, have a major roadblock ahead in the form of Kansas City’s top-rated passing defense that surrenders only 199.4 yards per game.

On defense, the Bills are among the best in the league when it comes to disrupting the opponent’s passing game. Buffalo is second in the league in sacks with 28 thus far this season. Marcell Dareus and Mario Williams lead the team in the sack department with 7.0 and 6.0, respectively. The Bills also have the second-most interceptions in the NFL with 12, just one short of the league-leading 13 of the Arizona Cardinals.

The Bills are 3-1 in their last four games.