The Kansas City Chiefs and the Miami Dolphins will be without their star running backs this week, which puts the onus on their respective quarterbacks to lift them up from Week 2 defeats. But between Alex Smith and Ryan Tannehill, who will be able to escape either defense’s excellent pass rush and deliver a much-needed victory?

Check out our preview of the Minnesota Vikings vs. New Orleans Saints for more on another intriguing Week 3 matchup and read on to see who comes out on top in sunny Miami.

The injuries just keep piling up for the Kansas City Chiefs. After losing Pro Bowl linebacker Derrick Johnson and starting tackle Mike DeVito for the year with Achilles injuries suffered in Week 1, the Chiefs may be without two more Pro Bowlers with star running back Jamaal Charles and safety Eric Berry going down to ankle injuries in their Week 2 loss to the Broncos.

[sc:NFL240banner ]But even with the spate of crippling injuries, the Chiefs hung tough against the AFC champion Broncos in Denver. The Chiefs even had a chance to tie or even take the lead with a late touchdown , but they couldn’t punch it in from just a couple yards out and fell 24-17.

Despite the loss, the banged up Chiefs still easily covered as 13-point underdogs, and could cause yet another road upset in Miami against the Dolphins.

The Chiefs’ offense showed it could still function without their do-it-all back, Charles. Running back Knile Davis filled in capably with 105 total yards of offense and two rushing touchdowns, while quarterback Alex Smith recovered from a horrific Week 1 to total 297 total yards against the Broncos.

And while the injuries to the Chiefs’ defense will hurt, they won’t hamper the team’s ability to rush the passer. With Knowshon Moreno out injured, Ryan Tannehill will likely be forced to throw against the Chiefs, who can then throw their excellent pass rushing duo of Justin Houston and Tamba Hali at the Dolphins QB.

But with a game that figures to be close, beware of Kansas City’s kicking game. Rookie kicker Cairo Santos has missed a field goal attempt within 40 yards in each of the team’s first two games.

Create a betting account today and cash in on some dangerous road underdogs. 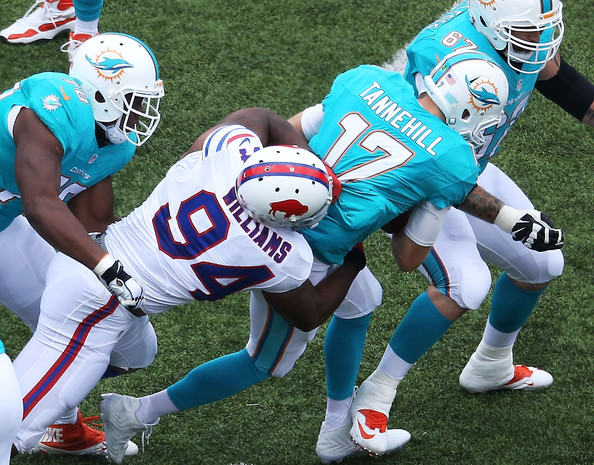 Once Knowshon Moreno went down with an elbow injury against the Buffalo Bills, the entire Dolphins offense sank along with him. The 33 points they put up on the Patriots in Week 1 behind the strength of 191 rushing yards – 134 from Moreno alone – turned into just 80 yards on the ground en route to a 29-10 loss at Buffalo.

So where does this offense go without Moreno, who has more rushing yards (138) than their other three running backs – Lamar Miller, Damian Williams and Orleans Darkwa – put together (133)? Wherever quarterback Ryan Tannehill takes it, which to this point hasn’t been very far. Tannehill’s 5.17 yards per passing attempt is currently the second-lowest in the NFL behind Tom Brady.

However, Tannehill has been able to consistently find his favorite target, Mike Wallace, so far this season. The two have connected 12 times for 137 yards and two touchdowns. If the Dolphins can’t establish the run without Moreno, the two will have to get together for a few more big plays against Kansas City.

Miami’s defense will also have to come up big. After sacking Brady four times in Week 1, the Dolphins couldn’t get to E.J. Manuel, giving him enough time to find Sammy Watkins for 117 yards.

The Chiefs have no such receiving threat and no Jamaal Charles, which is welcome news to the Dolphins D. And with the deadly pass rush combination of Cameron Wake and Olivier Vernon out to pressure Alex Smith, Miami could be well-placed to contain both the pass and the run against the Chiefs.

The Chiefs with Smith and Davis look like a better bet to withstand the loss of their star back than the Dolphins’ Tannehill and Miller. Take the Chiefs to at least cover the 4.5-point spread against Miami on the road.