Here come the Chiefs! Kansas City moved to within 2.5 games of the division-leading Denver Broncos in the AFC West with a critical eight-point victory over Buffalo on Sunday. They will look to slice that deficit even further when they take on the resurgent Oakland Raiders in a mouth-watering showdown at O.co Coliseum.

Who will emerge victorious in this pivotal clash? Read on below for a preview of this divisional showdown and while you’re at it, you can check out our Week 13 previews of Detroit vs. Green Bay and Dallas vs. Washington.

Betting on the Kansas City Chiefs (6-5)

The Kansas City Chiefs will head to their showdown with Oakland with momentum on their side after trouncing the Buffalo Bills, 30-22, on Sunday. It was another impressive victory for the streaking Chiefs who are incredibly right back in the thick of the playoff race.

[sc:NFL240banner ]Starring for Kansas City in this enthralling contest was quarterback Alex Smith. He completed 19 of 30 passes for 255 yards and two touchdowns and also added 35 rushing yards. This was just Smith’s third multi-touchdown game and the 255 passing yards were his fourth-most of the season.

Also impressing for the Chiefs in this all-important victory were Spencer Ware and Jeremy Maclin. Ware torched the Buffalo defensive line with a whopping 114 rushing yards and a score on 19 carries. Maclin, on the other hand, benefited from Smith’s stellar play, nabbing nine receptions for 160 yards and a touchdown.

They will look to sustain the momentum of that huge win when they take on the Raiders this coming Sunday. For the Chiefs to stretch their unbeaten run, they will need to continue their excellent play on the offensive end. The Kansas City offense was exceptional on Sunday, gaining 413 total yards on the afternoon.

Kansas City’s offensive explosion was quite a feat considering the Chiefs were averaging just 345.1 yards in total offense prior to their game with Buffalo, 19th in the NFL. They will be licking their chops at the prospect of facing an Oakland side that is sixth-worst in the NFL in total defense, allowing 391.0 yards per game this season.

The main concern, however, for head coach Andy Reid heading into this game is his team’s growing injury crisis. All-Pro linebacker Justin Houston was tripped by a Kansas City teammate in the first half and did not return with a knee injury. Center Mitch Morse sustained a concussion while left tackle Eric Fisher hurt his neck, and neither made it back onto the field in the game against Buffalo.

The Chiefs are 3-3 SU and ATS on the road this season.

Betting on the Oakland Raiders (5-6) 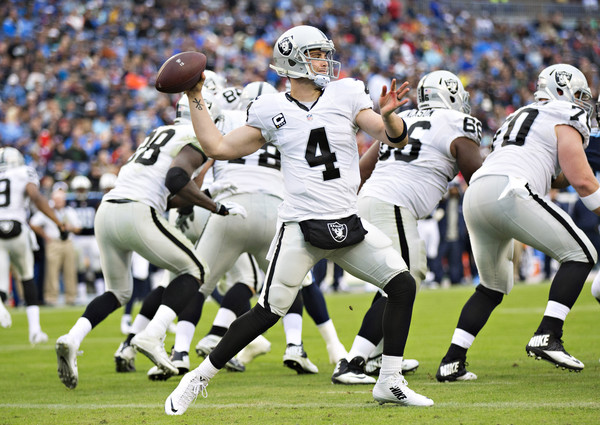 The Oakland Raiders finally snapped their three-game losing streak with a heart-stopping 24-21 win over the Tennessee Titans on Sunday. The Raiders blew an 11-point lead in the third quarter but recovered just in time to win for just the second time in seven trips to Tennessee.

Starring for Oakland in this critical road win was Derek Carr. The sophomore quarterback finished with 330 yards and three touchdowns in his sixth 300-yard passing game this season. He hit Seth Roberts for a 12-yard touchdown with just more than a minute remaining to give the Raiders the all-important victory. Roberts was also phenomenal for Oakland in this contest, grabbing six catches for 112 yards and a pair of touchdowns.

Another guy who needs to step up for Oakland this coming Sunday is Amari Cooper. He had seven receptions for 115 yards in the game against the Titans. The Raiders are seventh in the NFL in passing offense, averaging a whopping 266.7 yards per game through the air this season. They will feel confident of their chances against a Kansas City secondary that allowed 286 passing yards in their last win against Buffalo.

The Raiders are 2-3 SU and ATS at home this season.