The New York Jets dug themselves a deeper hole after losing to the Buffalo Bills Sunday, their seventh in a row since winning their season opener over the Oakland Raiders. Worse, the team is now in on another round of quarterback controversy after Geno Smith’s implosion against the Bills.

Can the Jets turn things around starting in Week 9 when they play the Kansas City Chiefs on the road? Or will the Chiefs, who are coming off back-to-back victories over the San Diego Chargers and the St. Louis Rams, win their third consecutive game at the expense of the beleaguered New York team?

Read on for more on this game and while you’re at it see our previews of Week 9’s Ravens vs. Steelers and Colts vs. Giants.

[sc:NFL240banner ]The more Geno Smith plays, the more reasons he gives Jets fans and coach Rex Ryan to believe that he has to be replaced. Unfortunately, backup quarterback Michael Vick can’t also stop himself from disintegrating. Both quarterbacks had three turnovers in the Jets’ 43-23 loss to the Buffalo Bills Sunday, leaving Ryan a full week to decide on whom to choose as the team’s starter next week when they travel to Kansas City to face the Chiefs. The Jets are 0-3 away from home thus far this season.

The QB starting job may be up in the air for now but it looks like Vick will get to have the pigskin next week. Despite throwing an interception and recording two fumbles lost against Buffalo, Vick nevertheless had a better control of the game than Smith, who threw all his interceptions in the first quarter. Vick completed 18 of his 36 passes for 153 yards, rushed for 69 yards on eight carries, and orchestrated the drives that resulted to all of the Jets’ 23 points in that game.

Percy Harvin’s addition to the team have given the Jets a much-needed weapon in their last-ranked passing offense that averages just 179.4 yards per game, but his impact was hardly felt on Sunday, racking up only 22 receiving yards on three catches.

Harvin may see more time in the backfield along with Chris Ivory and Chris Johnson in Week 9, as the Chiefs’ aerial defense is among the best in the league, allowing just 209.0 passing yards per game to opposing teams. The trio will be the nucleus of the Jets’ rushing attack, which has been the team’s brightest spot. The Jets, who are fourth in the NFL with 140.0 rushing yards per game, will be led by Ivory (475 rushing yards, 5 TDs) when they oppose Kansas City’s middling rushing defense (112.9 yards allowed per game) 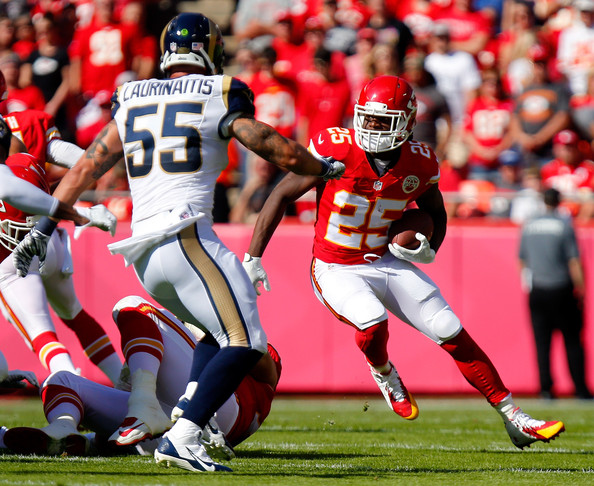 Once Jamaal Charles and Knile Davis buckled down to work, there was little the St. Louis Rams could do to prevent Kansas City from crushing them. Charles ran for 73 yards and two touchdowns, while Davis had 49 yards on the ground with a TD to boot, as the Chiefs won 34-7 Sunday to go above .500 for the first time this season with a 4-3 record.

Like the Jets, Kansas City relies heavily on their backs to manufacture points. The Chiefs are the third in the league with 140.7 rushing yards per game and their 10 rushing touchdowns are tied for most in the NFL. The tandem of Davis and Charles has been the driving force of Kansas City’s ground attack, both combining for 764 rushing yards and eight TDs this season. Kansas City, however, must be able to get something from its wideouts next Sunday as the Jets’ defense doesn’t give a lot of rushing yards to opposing teams, only surrendering 85.4 yards per game.

The Chiefs are 29th in the league with just 202.3 passing yards per game and none of the team’s wide receivers has scored a receiving TD since the start of the season. In fact, of the nine total receiving TDs thus far by the Chiefs this season, five were produced by members of the backfield: Charles and Joe McKnight each have two, while fullback Anthony Sherman has one. Wide receiver Dwayne Bowe, however, has been busier lately, recording 148 yards on 11 receptions over the last two games.

On defense, it appears that the Chiefs are more than capable of putting the clamps on the Jets’ prolific running game. Kansas City is the only team in the NFL that has yet to give up a rushing touchdown this season.

The Chiefs are 2-0 ATS in their last two games.