Need an edge for your NFL betting card this weekend? No problem.

We’ve already laid down our complete picks and predictions for Week 5 of the 2014 NFL season as well as ranked the teams from top to bottom on the season to this point. However, if you’re looking for more specific examples before making your picks, then all you need to do is read on as we compile experts’ spread picks for Week 5 of the 2014 NFL season.

Below we look at the picks from CBS, ESPN and FOX, accounting for the line they’ve picked against in particular. For the latest lines, check out our NFL Week 5 point spreads.

Is this the week for the road underdogs? CBS Sports’ Jamie Eisenberg and Jason La Canfora of CBS certainly think so. They picked the Ravens and the Bengals (both +3.5 road dogs) to cover against the Indianapolis Colts and New England Patriots, respectively, in two of the bigger games on Sunday. Meanwhile, other underdog picks by Eisenberg and La Canfora are the Browns over the Titans and Chiefs over the 49ers.

[sc:NFL240banner ]While the Colts have the top offense in the league with 444 total yards per game, their passing defense isn’t as stellar. They allow 251.2 passing yards per game (21st in the league). Ravens quarterback Joe Flacco and leading wide receiver Steven Smith Sr. can certainly exploit that hole in the Colts’ defense. Flacco has passed for 1,055 yards with seven touchdowns in four games, while Smith has hit his stride ranking third in the NFL in receiving yards (429) while catching three touchdown passes.

The Cincinnati Bengals are coming in on a three-game win streak. Meanwhile, the Patriots have suffered their worst defeat (41-14 against the Chiefs) under coach Bill Belichick. Tom Brady has disappointed this season, ranking just 21st in the NFL with 791 passing yards this season. Still, Brady isn’t the only issue. The offensive line has not given him enough time to throw while his receivers have also underperformed. Even Brady himself ripped the Patriots’ offense.

The Patriots are struggling to find their groove, but they’re still a favorite to win the AFC Championship at +625.

The Bengals are well-equipped to hand the reeling Patriots a loss. Quarterback Andy Dalton is averaging 8.6 yards per pass attempt, the best among quarterbacks with at least 80 throws. On the other side of the ball, pass rusher Carlos Dunlap (averaging one sack per game) should be able to defeat the Patriots’ porous O-line. You can view our complete preview for the Bengals vs. Patriots game here.

Bleacher Report almost exclusively picked the favorites to cover in Week 5 (12 of 15 picks were for favorites). The only underdogs they have covering are the Browns, Tampa Bay and the Bengals.

Of the three underdogs, only the Browns have played in closely-contested games this season. They lost by a field goal to Pittsburgh, by two points to the Ravens and won by a field goal against the Saints. Even though the Browns are 2.5-point underdogs (for Bleacher Report) against Tennessee, they have a very live chance of coming up with the win. In fact, Top Bet has the Titans as only one-point favorites. For more on the Browns game, check out our complete preview. 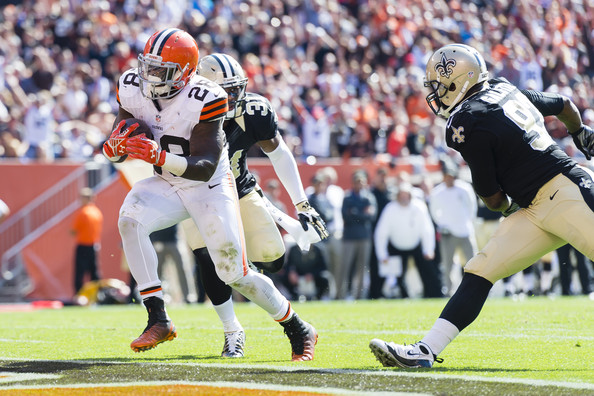 The Titans are only 22nd in the league in defending against the run, and the Browns have a strong backfield with rookies Terrance West and Isaiah Crowell, as well as the potential return of Ben Tate. The Cleveland runnings backs have run the ball well enough to rank 10th in the NFL with 132.7 rushing yards per game.

The Tampa Bay Buccaneers are coming in hot after their last second victory over the Steelers on Sunday. Meanwhile, two of their three losses have come by single digit deficits. The Bucs also have the means to keep this game close by exploiting the Saints’ fourth-worst passing defense in the NFL with opponents averaging 272.5 yards against them.

Tampa Bay quarterback Mike Glennon made his first start this season in place of an injured Josh McCown, and delivered with 302 yards and two touchdowns against Pittsburgh. If Glennon can keep up his game, then he’ll be able to exploit the Saints’ wide-open pass defense. Read our complete breakdown for this game here.

FOX Sports utilized WhatIfSports.com football simulations to predict the outcome for this week’s games. Each game was simulated 10,000 times using up-to-date stats and rosters. The average scores were then computed for the predictions.

Among all the experts listed here, only FOX Sports picked the Bills to cover +9 against the Detroit Lions even with Buffalo’s quarterback situation. On Monday, head coach Doug Marrone decided to bench the second-year quarterback EJ Manuel in favour of starting journeyman Kyle Orton. With their quarterback transition, the Bills may opt to turn to their running attack even more.

However, the Lions are particularly strong in defending against the run, allowing only 80.8 rushing yards per game. Want to know more about the Bills vs. Lions ahead of their game? Read our complete preview to get yourself more informed.

Now you have all the backing you need to place your bets for this week’s NFL action. Create a betting account now and earn a profit from all the football games this week.