It’s still too early in the season to push the panic button but there is legitimate concern among New Orleans fans with the way Drew Brees and the rest of the Saints are playing right now after a demoralizing defeat to the Dallas Cowboys on Sunday night dropped the team to 1-3.

The Saints will look to return to their winning ways this week against a rejuvenated Tampa Bay Buccaneers team that is now tied with the Saints at 1-3 after a stunning upset against the Pittsburgh Steelers.

Read on for a complete preview of this NFC South matchup and for other NFL analysis see our Kansas City-San Francisco betting preview.

What a difference a week makes. Nine days after suffering a 42-point humiliation at the hands of the Atlanta Falcons, the Buccaneers rebounded in a big way, upsetting the Steelers 27-24 on the road no less.

[sc:NFL240banner ]Quarterback Mike Glennon was the man of the match for Tampa Bay as his five-yard touchdown pass to a diving Vincent Jackson with seven seconds remaining completed the comeback for the Bucs who finally recorded their first win under new head coach Lovie Smith.

It was a remarkable turnaround for the Bucs who were a huge disappointment in the previous game against Atlanta. In that game, they were outgained in terms of total yards, 488-211. This time around, Tampa Bay were able to record 350 total yards and they will have their passing game to thank for that.

Glennon, making his first start this season in place of the injured Josh McCown, completed 21 of 42 passes for 302 yards and two touchdowns. The Bucs racked up a total of 287 passing yards in the game, 134 yards more than their output against Atlanta. In fact, even after this improvement, the Buccaneers remain dead-last in the passing yards department this season, averaging just 194.2 yards a game.

The Bucs will have a fantastic chance of continuing this great passing performance when they take on the New Orleans Saints this coming weekend. The Saints have the fourth-worst passing defense in the NFL with opponents averaging 272.5 yards against them this season.

If Glennon can keep completing passes, Louis Murphy will be a big part of the action for the Bucs. He caught six passes for 99 yards and was the driving force for Tampa Bay in Week 4. A similar performance against the Saints in less than a week’s time will go a long way in helping them snatch their second-straight victory. 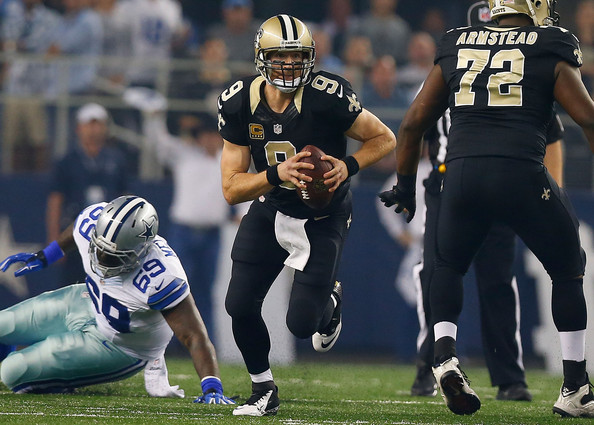 The New Orleans horror season just keeps getting worse. On Sunday night, they suffered a 38-17 drubbing at the hands of the Dallas Cowboys to find themselves at the bottom of the NFC South standings alongside the Bucs.

The Saints defense simply had no answer for the Cowboys’ balanced attack as they were torched for 445 total yards. 190 of those came via the ground game as running back DeMarco Murray was once again in dominant form, rushing for 149 yards on 24 carries.

It’s not just the rushing defense that is the problem for the Saints this season, however. Their pass defense is a mess too as evidenced by Tony Romo’s three-touchdown night last Sunday. With the defensive line and the secondary both struggling at the same time, you know that the Saints are in a whole lot of trouble.

They are the fourth-worst defensive team in the NFL this season allowing a total of 396.0 yards per game this season. To make matters worse for New Orleans, their offense is not clicking as it once used to either.

They were shutout by the Cowboys in the first half last Sunday as Drew Brees only had 84 passing yards an interception by halftime. Although he finished the game with 340 yards, most of those came in the second half when the game was already out of reach.

We can expect Brees, however, to bounce back strongly as he will face the Tampa Bay Buccaneers this coming weekend. Just like the Saints, the Bucs have been horrible defensively, particularly on the passing end. They have the fourth-worst passing defense this season (272.5 yards allowed per game) and Brees will be licking his chops at targeting the fragile Tampa Bay secondary.

What’s even scarier for Tampa Bay is that New Orleans have been unbeatable at home for the last season or so. They were a perfect 8-0 SU last year at the Superdome and have started their home campaign this season with a comfortable 20-9 win over the Minnesota Vikings.

Through four games this season, Brees has completed 115 of 161 passes for a 71.4 percent completion rate. Although he is fifth among starting quarterbacks in the passing yards department with a 300.8 average this season, his passer rating of 99.5 is way below the 104.7 mark he established last year.

The Saints are 5-0 SU in their last five meetings with the Bucs. They are 1-3 ATS, however, so far this season.

The Saints (-10.5) crush the Buccaneers by double-digits to cover the spread.